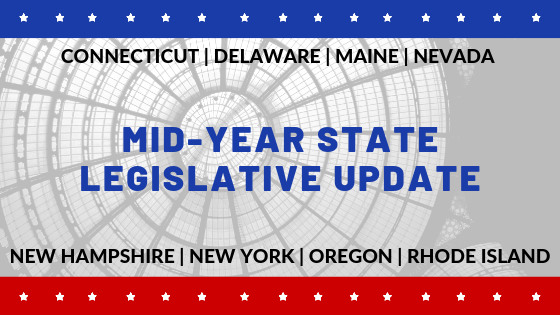 Most state legislative sessions have adjourned, while others continue in session year-round. The CAI legislative action committee (LAC) volunteers and lobbyists demonstrated their strength in protecting CAI members from legislation that would have a negative impact while advocating for laws that would help.

Check out a snapshot of successful sessions that adjourned in June below and catch up on legislation CAI continues to track.

The LAC remained busy throughout the session, monitoring more than a dozen bills—from association records and condominium ombudsman programs to home-based businesses and manager licensing.

HB 7276, a bill that addressed child care home-based businesses, would have superseded any covenant restrictions on the topic. The LAC aggressively opposed this bill by sending more than 400 petitions, signed at CAI chapter events, to members of the Connecticut Senate and House.

If you read our blog post last month, you also are aware that amendments were passed to Connecticut’s community association manager licensing program. The changes clarified the licensing program, allowing it to operate more smoothly.

CAI tracked several bills in the legislature; one bill passed impacting community associations. The bill, SB 109, amends Delaware code relating to makeup of the Common Interest Community Advisory Council.  CAI has a seat on the Advisory Council and will continue to have a seat after the Governor signs the bill.

Two bills were passed in this year impacting the community association industry. One bill allows voting by a nonprofit to be conducted by electronic means. Another bill amended the Maine Condominium Act to allow a lien for unpaid condominium assessments to be extinguished unless proceedings to enforce the lien are instituted within six years after the full amount of the assessments becomes due.

Maine’s LAC successfully opposed a bill that would prohibit a homeowners association from restricting the construction and operation of an amateur radio station by an amateur radio operator licensed by the Federal Communications Commission.

The legislature, like Montana and Texas, convenes every other year. In this year’s session, AB 396—removing priority lien from Nevada statute at a constituent’s request—was introduced. Nevada is currently one of 21 states that operates with a priority lien statute, which effectively preserves property values and balances the interests of homeowners in community associations and lenders. Priority lien statutes are the reasonable solution to abandoned property, community blight, and zombie foreclosures.

Fortunately, CAI’s LAC and our lobbyist advocated for community associations tirelessly, and the bill died. The LAC acted quickly and sent more than 8,400 emails to leverage our grassroots in the state. For now, Nevada will remain a priority lien state for another two years. It was great work by our lobbyist and the LAC. Thank you to all those who acted.

Here are a few other highlights about legislation that passed in Nevada:

The LAC spent the majority of the session opposing legislation that would negatively impact community associations. These bills largely focused on improperly regulating condominium associations through budget and special assessments regulations, dispute resolution boards, and payment arrears. Maine’s LAC also was able to kill a bill that would have prevented a community association from restricting the installation and maintenance of amateur radio towers and antennas.

Early on in the session, Oregon’s legislature made headlines across the country by passing the first statewide law in the country to impose rent control on landlords.

The LAC did not take a position on the rent control bill, but there were quite a few bills that required their efforts. There were a number of proposals that failed to pass the legislature, including short-term rentals, financial practices in associations, and association investments.  Here are the highlights of one bill that passed and others that failed:

Several bills passed impacting community associations. One bill imposing a penalty against a condominium association that fails to deliver a resale certificate within 10 day of a request by a unit owner was signed by the governor at the end of June. Another bill, which passed in both the House and Senate and is awaiting the governor’s signature, requires financial records to be made available for examination by unit owners within 30 days of a request.

For more information on what is happening or happened in your state during the 2019 legislative session, click here.

To read about the states with legislative sessions that adjourned by the end of May, click here.

To read about the states with legislative sessions that adjourned by the end of April, click here.