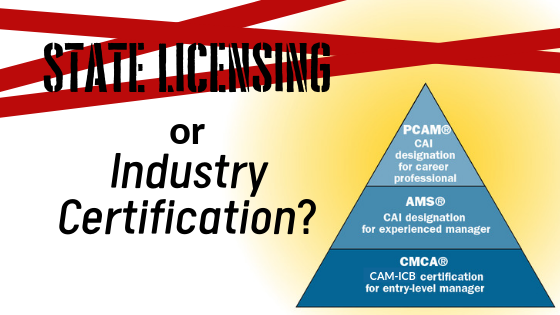 Nearly one in three Americans in the workforce perform a job that requires an occupational license, according to a study published in 2015 by a Minnesota professor and a White House paper published in 2016 .

The Trump administration has continued the efforts started by the Obama administration by urging states to take up occupational licensing reform. The 2019 legislative sessions saw momentum building in several states. Experts believe occupational licensing laws are inhibiting economic opportunity and hurting consumers. A recent analysis by the Institute for Justice suggests licensing costs the U.S. economy between 1.8 and 1.9 million jobs and between $183.9 and $197.3 billion each year in misallocated resources and lost output.

Only seven states had licensing of the community association management profession on the 2019 legislative agenda.

Colorado (HB 1212). In 2018, the legislature voted to end the community association manager licensing program. However, in 2019, a bill was introduced to extend the licensing requirement. The bill, HB 1212, passed the Assembly and the Senate. It looked as though licensure of community managers would continue . However, Gov. Jared Polis vetoed the bill. In his veto statement, Governor Polis stated, “Before any unregulated occupation is to be regulated, or any regulated occupation is to be continued, the state should complete its due diligence to ensure that regulation will, in fact, ensure consumer safety in a cost-efficient manner.  This bill (HB 1212) does not meet that threshold.” (Status:  Vetoed)

Connecticut (HB 6465). The state has had a relatively simple statutory requirement for licensing community association managers. The legislature passed a measure that provides some clarifications to the licensing program so that it operates more smoothly.  (Status: Passed)

Nevada (AB 31). A statutory requirement licensing community association managers has been in place for years. A few minor changes were made to the licensing program during the 2019 legislative session. (Status:  Passed)

Ohio . While the Division of Real Estate and Professional Licensing is very interested in pursuing legislation to licensing community association managers as real estate brokers, the legislative leadership has indicated there is no appetite for new regulatory programs in the state. (Status: Not yet introduced)

Virginia (HB 2099). Legislation was introduced to deregulate several occupational licensing programs, including community association management. Considering the deregulation trend through the country, it was no surprise this bill was introduced. However, the legislature failed to pass the bill. Therefore, community association managers in Virginia remain licensed. (Status: Failed)

The legislative bills listed above may be found here.

Arizona. Allows a person with a criminal record to petition an agency before applying to determine whether the criminal record disqualifies them from obtaining a license, permit, or certificate. The bill also allows people moving to Arizona from other states to use their license from a different state to meet Arizona licensing criteria. This Arizona bill could lead the country in occupational licensing trends

Virginia. Creates a specific structure and set of criteria for the Department of Professional and Occupational Regulation to evaluate the need to regulate a profession.

Fifteen states also have introduced legislation based on the Uniform Collateral Consequences Act, which says that an individual with a criminal record may petition for relief from rules that would prohibit them from obtaining licensing or certification: Alabama, Arkansas, California, Colorado, Illinois, Massachusetts, Mississippi, Montana, Oklahoma, Pennsylvania, Rhode Island, South Carolina, South Dakota, Texas and Wisconsin.

Stay up to date on occupational licensing and its impact on the community association housing model by visiting our web site regularly.