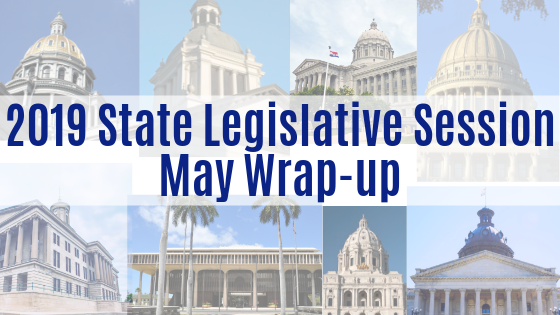 CAI’s legislative action committees (LAC) continue to volunteer hundreds of collective hours to review bills, draft testimony, work with the LAC’s lobbyists, meet with legislators and other decision-makers, and testify for and against bills. Another 13 states adjourned their 2019 legislative sessions in May. Here are the highlights.

The LAC reviewed dozens of bills that had an impact on community associations. Bills ranging from short-term rentals, writ of garnishments, and amending the planned community statute all passed this session. Many bills impacting community associations did not pass, including legislation on write-in candidates for board positions, lien priority, and declaration amendment procedures.

One bill of note required an HOA with more than 50 units or lots that contracts with a third party to perform management services to provide a statement of account in lieu of a periodic payment book to the unit owners or members with the same frequency that assessments are provided for in the declaration. Importantly, the LAC was successful in narrowing the impact of this bill to eliminate its effect on smaller communities.

The state saw a win for environmental initiatives, and legislation impacting sustainable landscaping in associations was signed by the governor.

Another newsworthy moment included a bill to extend the community association manager licensing program, which the legislature voted to end in 2018. The bill passed the Assembly and the Senate. It looked as though licensure of community managers would continue. However, Gov. Jared Polis vetoed the bill.

As a state with one of the most burdensome regulatory systems for community associations, the Florida Legislative Alliance worked tirelessly promoting legislation to help associations. The committee advocated for an extension for condominium sprinkler system retrofitting and clarification of community association regulations. They also advocated to stop harmful legislation, including criminal penalties for board members, nonbinding arbitration for construction defects and restricting home rule for short-term rentals.

The LAC had two specific legislative priorities this session: addressing a 2018 decision by the Hawaii Intermediate Court of Appeals concerning nonjudicial foreclosure and address problems arising from the 2018 passage of a bill preventing the adoption of condominium priority of payment policies. Both goals were achieved.

The legislature expressed its intention that condominium associations are authorized to conduct nonjudicial foreclosures regardless of the presence or absence of power of sale language in their project documents and passed legislation ensuring this occurs. They also reauthorized priority of payment polices subject to certain criteria.

Dozens of other bills were tracked. Efforts to undermine condominium self-governance were presented early in the session but did not move forward. We await the governor’s action on the legislation passed.

The LAC had an unusually quiet session. In recent years, there were several controversial bills introduced related to manager licensing, reserve requirements, and restricting the ability of boards of directors to initiate legal action on behalf of their members. Thankfully, none of these issues were reintroduced in 2019.

This year was a particularly interesting session in no small part due to repeated Senate filibusters preventing most filed legislation from moving forward. However, a nuisance bill passed. It modifies how actions against another property owner whose property is a nuisance are brought in certain cities and counties.

CAI leveraged grassroots efforts throughout the state to aggressively oppose a Senate bill purporting to protect property rights for owners against any future changes to the association’s rules. The bill would have fundamentally changed the way rules apply to community association members. More than 1,880 emails were sent to legislators and the governor’s office opposing this bill. Unfortunately, the House and Senate did not understand the unintended consequences of this bill, and it passed.

As the LAC suspected, the Department of Consumer Affairs took liberties with their data collection. CAI believes the questions asked by the state contained bias and exceeded the scope of the parameters set out in the legislation. The LAC has written to the Department of Consumer Affairs on several occasions this year to resolve their concerns. These efforts have taken time and political capital.

The LAC’s efforts were mainly focused on aggressively opposing and successfully killing two bills that would have impacted long-term leasing in community associations. These bills initially focused on solar energy in community associations. However, in March, an amendment prohibiting HOAs from enforcing rules that restrict rentals—even if the majority of homeowners vote to restrict the number of rental properties in their community—was added to both bills. The rental restriction would have only applied to buyers who purchase the property after the rule or bylaw is adopted. This effectively would have removed the power of HOA members to make decisions for their neighborhood.

The LAC sent dozens of CAI members to Nashville to testify opposing these pieces of legislation and leveraged grassroots to send more than 10,000 emails to members of the Tennessee House and Senate. Ultimately, the bills were not passed and deferred to summer study.

Ten more states are adjourning this month. Check back to see the results of their legislative sessions in the coming weeks. For more information on what is happening or happened in your state during the 2019 legislative session, click here.