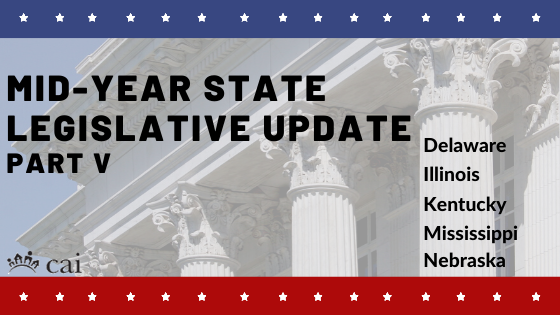 During the COVID-19 pandemic, CAI’s legislative action committees (LACs) volunteered hundreds of hours reviewing bills, drafting testimony, working with lobbyists, meeting with legislators and other decision-makers, and testifying for and against bills.

Here is the fifth part of our series focusing on legislative issues impacting the community association housing model.

Delaware
HB 359: Amending the Delaware Code Related to Emergencies. This bill was introduced with the intent to make it easier for businesses and homeowners associations to open their doors and their community facilities without fear of facing frivolous negligence lawsuits from customers, patrons, or facility users. Status: Failed.

Illinois
Like most state legislatures, the Illinois General Assembly came to an abrupt halt because of the pandemic and left legislation on the table, including bills related to electric vehicle charging stations, resale disclosures, insurance, and the following:

HB 4766: This bill would have extended the Community Association Manager Licensing & Disciplinary Act to January 2031. Status: Failed. (Note: Licensing is in place until January 2022.)

SB 2480: Condo Lease Fees. The bill would have prohibited community association management companies from charging for management of leases in a condominium community. Status: Failed.

Kentucky
SB 93: Residential Communities. This legislation was introduced to define and regulate the governance of planned communities within Kentucky. Status: Failed.

Mississippi
HB 636: Homeowners’ associations, regulating managing agents. While Mississippi does not have a formal LAC, CAI members actively worked to introduce this legislation in the state senate. The bill would have regulated the ability of managing agents in homeowners associations to deposit and handle association funds. Status: Failed.

LB 973: Adopt the Homeowner Association Act. CAI actively monitored this bill, which would have introduced a homeowners association act in the state of Nebraska. Status: Failed.

View more information on what is happening or happened in your state during the 2020 legislative session.