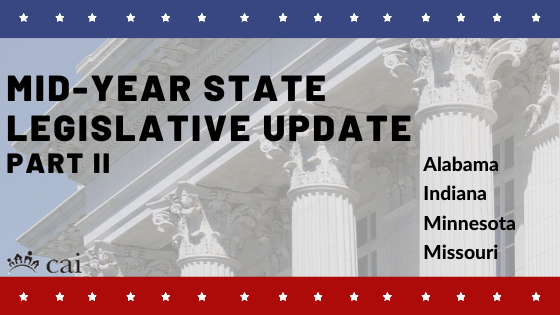 During the COVID-19 pandemic, CAI’s legislative action committees (LAC) volunteered hundreds of collective hours to review bills, draft testimony, work with lobbyists, meet with legislators and other decision-makers, and testify for and against bills.

Here is the second part of a series focusing on legislative issues impacting the community association housing model.

Alabama
The Alabama State Senate introduced a bill prohibiting a property owners association from restricting the display of the state flag. The bill allowed an association to place a reasonable restriction on the time, place, and manner a flag can be displayed, aligning with CAI’s public policy on the placement of flags within a community. The Alabama LAC closely monitored this bill to make sure the language was not amended. The bill didn’t pass.

Indiana
The Indiana State Senate introduced legislation this session prohibiting community associations from adopting rules, covenants, declarations of restrictions, and other documents that would prohibit the installation of solar energy systems, which is in direct conflict with CAI’s public policy on solar rights and easements. The Senate also introduced a bill that defined a chicken as a pet when determining the types and number of animals allowed as pets under the governing documents of an association. The Indiana LAC closely monitored these unsuccessful bills.

Minnesota
The Minnesota LAC successfully amended the Minnesota Common Interest Ownership Act this session. Many Uniform Common Interest Ownership Act states, including Minnesota, follow the common practice of a supermajority vote of unit owners to amend governing documents, which is difficult for many associations to achieve. The state LAC brainstormed two new procedural options to allow an association to amend their documents, including deemed consent of owners or petition and court approval process.

Prior to the COVID-19 pandemic, members of the Minnesota LAC and CAI Minnesota Chapter met with legislators and testified in front of the Minnesota House and Senate on the importance of these new procedures being incorporated into the act. The House and the Senate approved these proposed procedural changes to the Minnesota Common Interest Ownership Act. Gov. Tim Walz signed the legislation into law, which becomes effective on August 1. The General Assembly will meet for their third special session in August.

Missouri
Several bills were introduced by the Missouri General Assembly, including restricting covenants relevant to new homeowners and regulating an association’s ability to manage solar panels. The Missouri Senate introduced a bill that makes it a misdemeanor for anyone knowingly misrepresenting a dog as a service animal. The bill was approved by Gov. Mike Parson and goes into effect on August 28. The Missouri LAC closely monitored each of these bills.

Read the first part of our state legislative update series on Connecticut, Maine, Maryland, South Carolina, and Virginia. For more information on what is happening or happened in your state during the 2020 legislative session, click here.