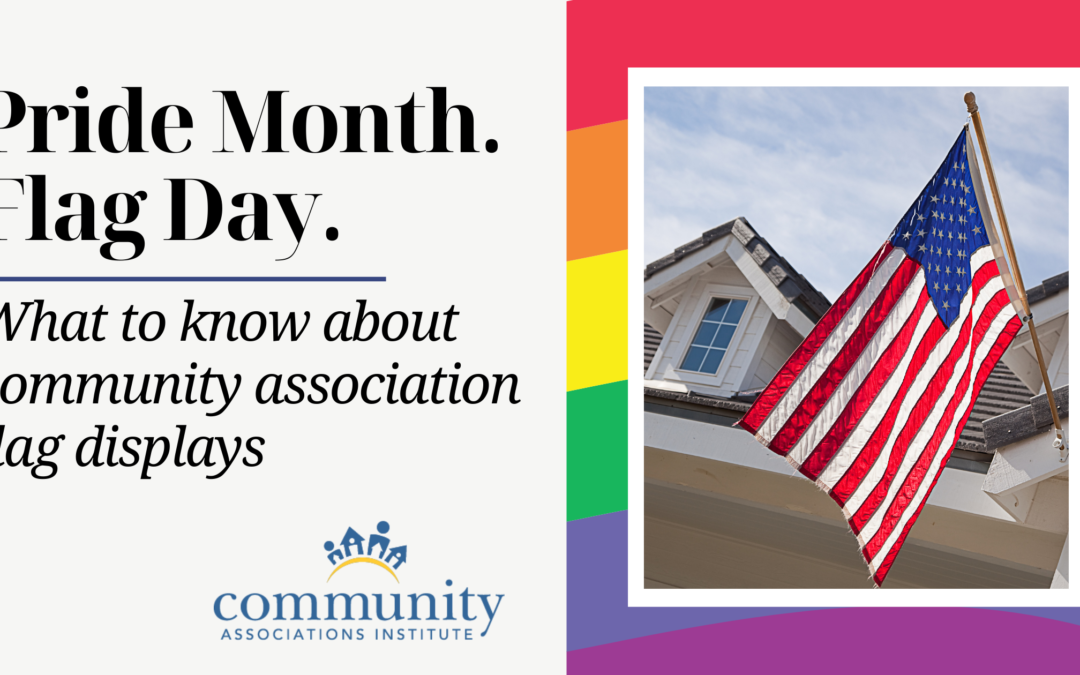 June is Pride Month. This year, President Joe Biden has called upon Americans to recognize the achievements of the LGBTQ+ community, to celebrate their diversity, and for those who support LGBTQ+ rights to wave their pride flags high.

Those celebrating Pride Month who live in a community association may not be aware of specific restrictions on flag displays contained in the governing documents before flying the pride flag. In addition, community association board members and managers enforcing these restrictions may not know that June is Pride Month. It may be time for another conversation about what the community wants as it relates to displaying flags.

The First Amendment guarantees the right to freedom of speech. However, this only applies to restrictions on speech by the government, not to limitations by private parties such as community associations. When an owner purchases a home in a community association, they agree to be bound by the covenants that exist to reflect the preferences of the homeowners in the neighborhood. Several states have laws governing political signs and/or flags, and these statutes would take precedence over community association restrictions unless otherwise stated.

During Pride Month, CAI urges the continued support of the Fair Housing Act of 1968 giving all individuals the right to be free from housing discrimination on the basis of race, color, religion, sex, familial status, national origin, or disability. CAI also supports further policy that prohibits housing inequality, including President Biden’s Jan. 20 executive order prohibiting discrimination on the basis of sexual orientation and gender identity.

In addition to Pride Month, June 14 is Flag Day, which celebrates the anniversary of the adoption of the American Flag at the Second Continental Congress in Philadelphia in 1777. Flag Day has become a day for Americans to show their national pride, pay respect to those who have served, and, of course, proudly display the U.S. flag.

As with the pride flag, it’s important for association residents to know their community’s rules around displaying the American flag.

The Federal Flag Code, 4 U.S.C Sections 5-10, as amended, states that “A condominium association, cooperative association, or residential real estate management association may not adopt or enforce any policy, or enter into any agreement, that would restrict or prevent a member of the association from displaying the flag of the United States on residential property within the association with respect to which such member has a separate ownership interest or a right to exclusive possession or use.” Community associations, however, may adopt reasonable rules regarding the manner in which the flag is displayed.

CAI believes that all Americans should have the opportunity to display the U.S. flag.

As always, we applaud communities that bring their residents together to help celebrate and embrace their differences. Communities around the world bring people together to create a sense of community, neighborliness, and belonging.

For more information about CAI’s policies on displaying the U.S. flag as well as other flags and signs, visit www.caionline.org/publicpolicies.