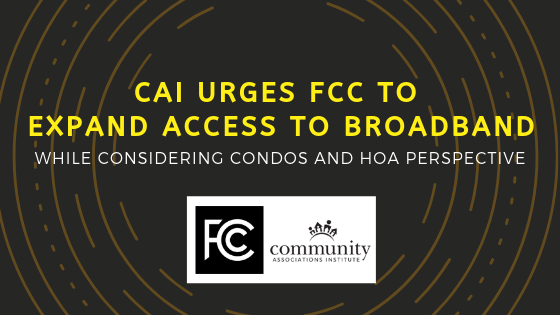 According to the FCC, an important part of closing the digital divide is promoting high-speed broadband access for the millions of Americans who live and work in apartments, condominiums, and office buildings, which the commission calls multiple tenant environments (MTEs).

To provide service to tenants, communications service providers must have access to the building. But, when service providers know that they would have to share the communications facilities that they deploy with their competitors, they are less likely to invest in deployment in the first place. For decades, Congress and the FCC have encouraged facilities-based competition by broadly promoting access to customers and infrastructure—including MTEs and their occupants—while sharply limiting to only narrow circumstances any mandatory sharing requirements that reduce incentives to invest.

Following these principles, this notice of proposed rulemaking and declaratory ruling would take steps to promote facilities-based broadband deployment and greater consumer choice for Americans living and working in condominiums, housing cooperatives, and homeowners associations.

CAI members want to improve access to competitive broadband while protecting their community association assets and mitigating exposure to overreach by internet providers due to complex contracts.

Below is a summary of CAI’s comments to the FCC on this topic and a link to the full comment letter.

CAI members support the FCC’s decision to not revisit its 2010 determination concerning exclusive marketing arrangements. CAI agrees such arrangements do not harm consumers and can have important consumer benefits.

CAI members believe exclusive wiring arrangements can benefit community association owners and residents if structured so the association’s ownership interest in common elements is clearly understood or uncompromised. Contracts combining company wiring with association-owned internal wiring into an exclusive use “system” deserve scrutiny to the extent that no alternate common element internal wiring system exists. Disposition or removal of abandoned wiring, particularly in instances where a provider has replaced an association-owned, home-run and/or home wiring system, remains a concern of CAI members.

While revenue sharing agreements may be a factor in nonresidential or industrial multiple tenant environments, CAI members report such agreements are not typically present, in the manner described by the FCC, in the community association housing model.