Will Upzoning Result in More Condos? 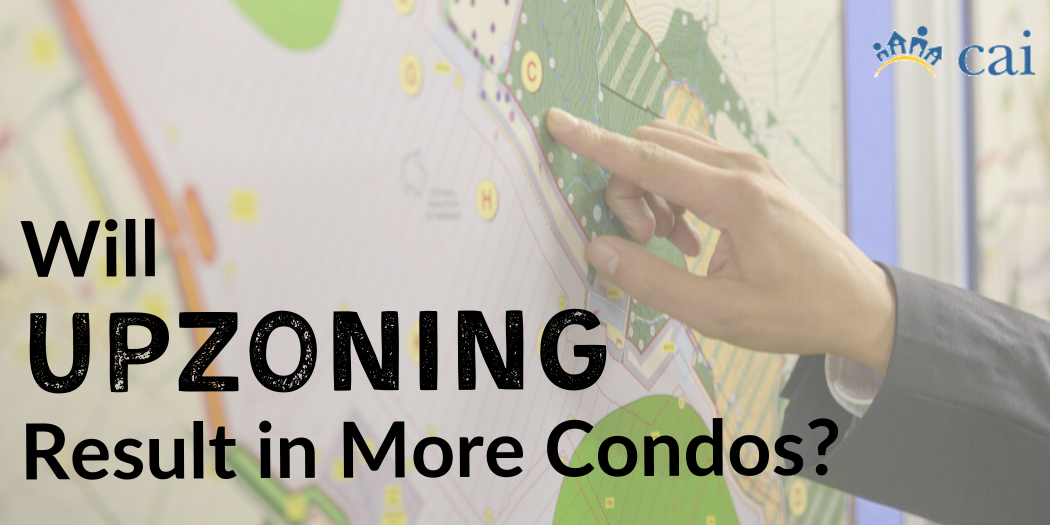 Nearly all housing-related organizations and major news outlets have reported on the affordable housing crisis in the U.S. Research from the Urban Institute, Harvard University, Brookings Institute, and advocacy groups supports that home prices are rising at a much higher rate than wage growth. Millennials, the generation making up the largest group of potential homebuyers today, are saddled with high student loan debt that makes it very challenging for them to save for a down payment for a home. It is a very complex issue, one that policymakers are increasingly trying to address.

Today, more than 75% of land zoned for housing in the U.S. is for single-family homes, according to UrbanFootprint. That figure is even higher in many suburbs and fast-growing cities. For example, 89% of land in Arlington, Texas, is zoned for single-family housing, followed by Sandy Spring, Ga. (85%), Charlotte, N.C. (84%), and Portland, Ore. (77%).

Under current zoning ordinances, townhomes, condominiums, apartments, and middle housing options are effectively banned in many neighborhoods. One of the trending solutions to the affordable housing crisis is upzoning—a law, ordinance, or other regulation that allows for higher-density development on land that is zoned for single-family housing.

Within the past year, Oregon and California, as well as cities like Minneapolis and Seattle—which has more than 81% of land zoned for single-family housing—have become trendsetters in considering or passing upzoning ordinances that essentially eliminate single-family zoning in favor of multi-family residential structures.

In late 2018, the Minneapolis City Council voted to pass a mandate that eliminates zoning ordinances for development of single-family homes and instead allows residential structures with up to three dwelling units to be built. Proponents of the measure, part of a comprehensive plan known as Minneapolis 2040, believe the change in zoning will address the affordable housing crisis in the city and eliminate housing practices that resulted in racial segregation. At the time of writing, the plan was expected to undergo final consideration in October by the Minneapolis City Council before enactment.

In August, Oregon Gov. Kate Brown signed HB 2001 into law, which allows development of duplexes, triplexes, fourplexes, and townhouses on land otherwise deemed for single-family development in localities with a population of 25,000 or more. Duplexes must be allowed on land zoned for single-family homes in localities with between 10,000 and 25,000 residents.

Although it did not pass, the California State Legislature considered the More Homes Act (SB 50) earlier this year. The bill had support from the mayors of Oakland, San Francisco, and Stockton, local groups such as Environment California and the California League of Conservation Voters, as well as Habitat for Humanity and AARP. In an effort to simplify the complex proposal that included factors related to “transportation rich” areas, “job rich” cities, and localities with large populations, the bill would have permitted new or modified development to allow for duplexes, triplexes, or fourplexes on land zoned for single-family residences.

Some concerns over these zoning changes are that they will shift the look of the locality. Where there once were single-family homes almost exclusively for miles, now there might be communities with small duplexes, triplexes, or fourplexes. CAI anticipates these new laws will increase the number of condominium housing developments as well. According to the Foundation for Community Association Research, condominium communities account for close to 42% of the 347,000 community associations in the U.S.

CAI is carefully monitoring state legislatures to protect the interests and integrity of the community association housing model—specifically, to ensure developments maintain appropriate levels of warranty protection for homebuyers. For example, legislation introduced this year in Washington state would have exempted developments of nine units or less from all construction warranty protections for the owners. The legislation failed, but we expect it to return in Washington and potentially other states.

Several presidential candidates have included the elimination of single-family housing mandates for new developments in their affordable housing proposals, and more stakeholders are engaging in addressing the housing affordability crisis. This conversation is not going away.