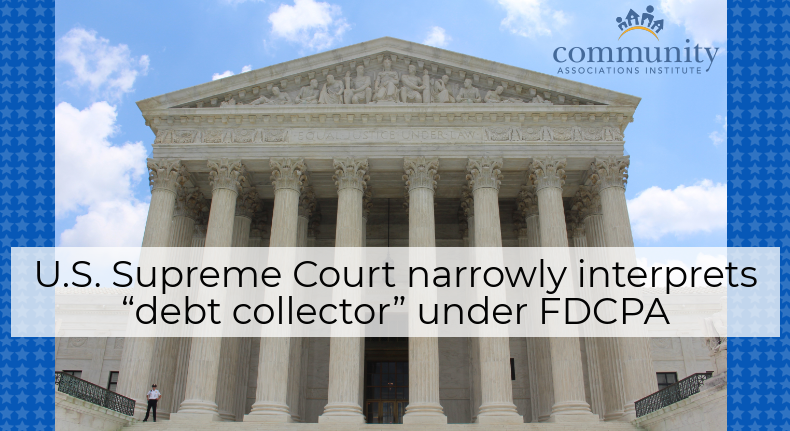 Enacted in 1977, the FDCPA protects consumers from abusive debt collection practices and has become one of the most heavily litigated statutes in the country. In recent years, FDCPA litigation has negatively impacted the ability of community associations to recover delinquent assessments through foreclosure.

The Supreme Court held that a law firm engaged in a nonjudicial foreclosure, McCarthy & Holthus LLP, was subject to the FDCPA’s provisions related to enforcing a security interest (15 U.S.C. § 1692(f)(6)), but the firm was not subject to the remaining provisions of the Act since it did not fall within the scope of the primary definition of “debt collector.” This ruling provides a much-needed clarification to lower courts as to whether the FDCPA applies to nonjudicial foreclosure proceedings. Prior to this ruling, the Supreme Court had never defined the term “debt collector.”

Justice Breyer delivered the unanimous opinion, holding that a business—such as a law firm—engaged in no more than nonjudicial foreclosure proceedings is not a “debt collector” under the FDCPA. He provides a clear interpretation of the FDCPA, saying, “Congress may well have chosen to treat security interest enforcement differently from ordinary debt collection in order to avoid conflicts with state nonjudicial foreclosure schemes.”

This decision is a win for community association law firms seeking to commence nonjudicial foreclosure proceedings. Although the decision is limited to the applicability of the FDCPA to law firms that engage in security interest debt collection, it is helpful to those firms that simply follow their state’s laws to enforce security interests and affirms that their state’s laws are not inconsistent with the FDCPA. Only time will tell how narrowly the lower courts and attorneys interpret this decision and whether it exempts law firms or other entities from the FDCPA unless nonjudicial foreclosure activity is the only activity they engage in.