What Federal Government Policies on Equity Mean for Community Associations 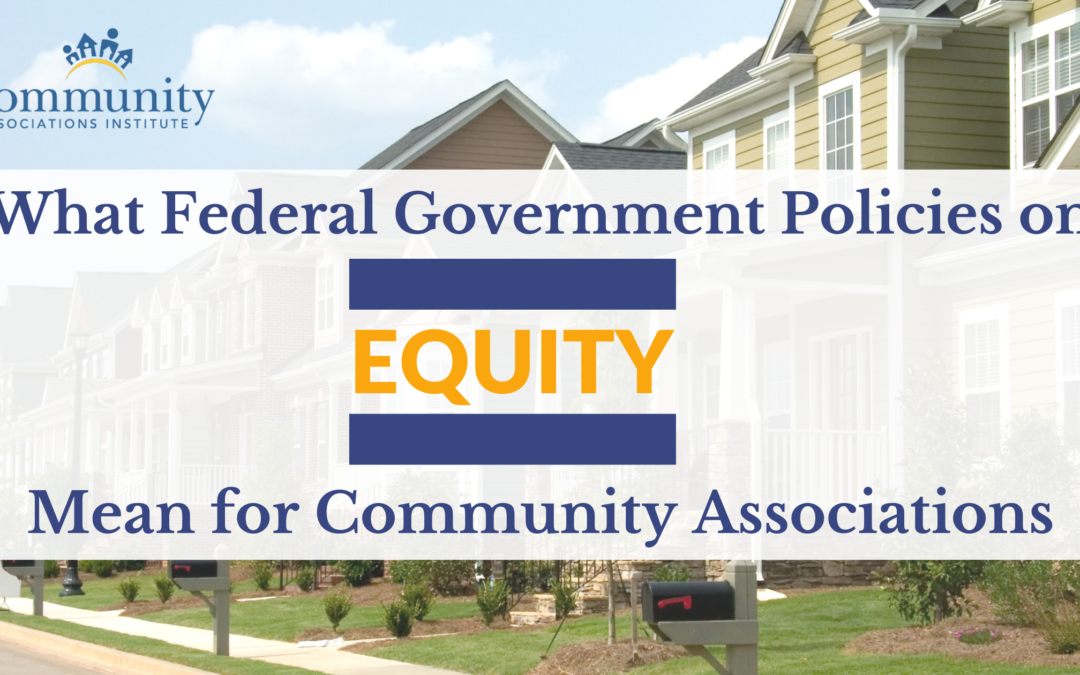 On January 20, President Joe Biden signed an executive order directing all federal agencies to advance equity. What is equity, and how will the executive order impact community associations?

President Biden’s executive order defines equity as “the consistent and systemic fair, just, and impartial treatment of all individuals, including individuals who belong to underserved communities that have been denied such treatment…” Under the executive order, each federal government agency must identify and change policies that limit equitable access to opportunity for all Americans. Eliminating these barriers in government is expected to create an additional $5 trillion in economic activity through 2026.

We can look to the not-so-distant past to find examples of U.S. government policy that denied equal opportunity to minorities and contributed to current homeownership inequities, specifically access to mortgage credit. The 1938 Federal Housing Administration (FHA) mortgage underwriting procedures handbook supported housing segregation through racially restrictive covenants. FHA policy was to only insure mortgages for homes purchased “by the race for which they are intended.” This requirement, along with others, excluded Black Americans and other racial, ethnic, and religious minorities from homeownership.

In implementing President Biden’s executive order, a focus of the U.S. Department of Housing and Urban Development (HUD) will be to determine if any federal policies are perpetuating the homeownership gap. The goal is to eliminate barriers that prevent equitable access to homeownership opportunities for all. CAI expects changes to federal mortgage programs that will make credit available to households that have been unfairly excluded from homeownership. HUD also will place a greater emphasis on fair housing enforcement.

In the area of mortgage access, CAI anticipates HUD will investigate if FHA mortgage insurance premiums are priced higher than actual mortgage risks. The use of down payment assistance programs by FHA may be reviewed, and the agency may expand use of credit scoring models that allow consumers to demonstrate creditworthiness by having consistently made on-time rent, utility, mobile phone, and other regular installment payments. Homeownership counseling, which prepares first-time homebuyers for the rigors of homeownership, also is likely to be expanded.

To stay up to date on all government actions that affect community associations and CAI members, subscribe to the CAI Advocacy blog and share it with your networks.