An Unfortunate Legacy: A Brief History of Racially Restrictive Covenants 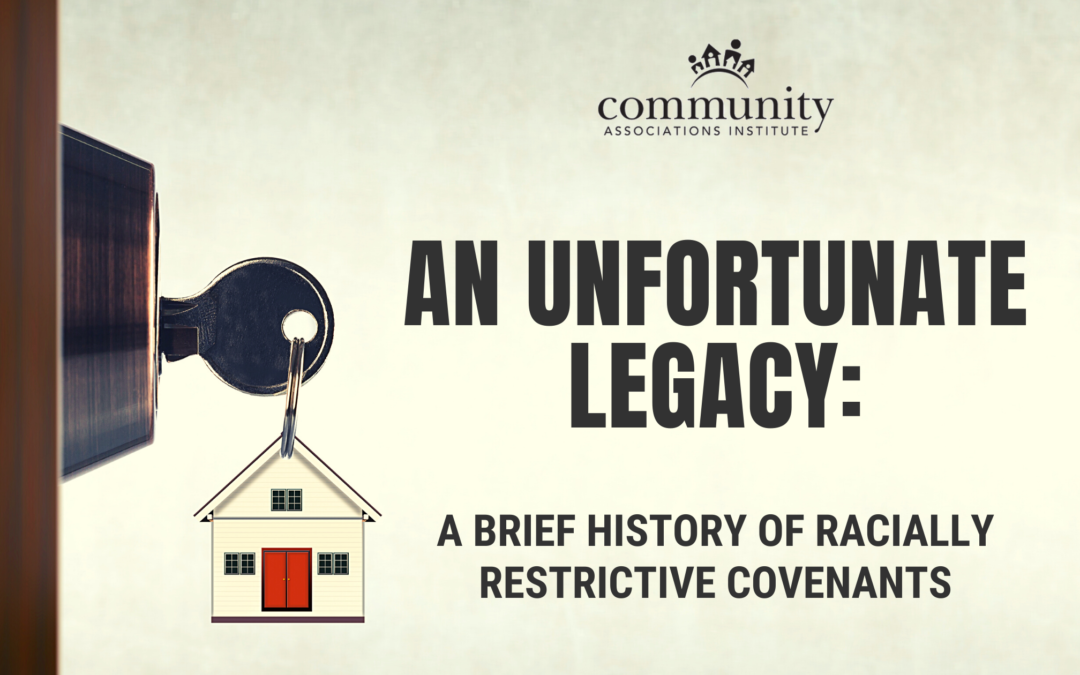 February is Black History Month, a time when we recognize the contributions of African Americans throughout U.S. history and remember the challenges they have overcome and continue to face in the pursuit of equality. When it comes to housing, discriminatory practices such as racially restrictive covenants left a disheartening legacy for Black homeowners and, while legally unenforceable today, many of these covenants are still recorded on the historic deeds of individual homes and in community association governing documents.

Racially restrictive covenants first appeared in deeds of homes in California and Massachusetts at the end of the 19th century and were then widely used throughout the U.S. in the first half of the 20th century to prohibit racial, ethnic, and religious minority groups from buying, leasing, or occupying homes. Some covenants generally barred “non-Caucasian” groups, while others would list specific races, nationalities, and even individuals with disabilities.

These covenants were frequently applied by developers before new houses were sold, often as a condition to receive a low-interest, 20-year mortgage from the Federal Housing Administration (FHA) under the New Deal, which sought to stabilize the housing market after the Great Depression. The FHA required properties to meet appraisal standards that included racial exclusivity, and it sanctioned the use of segregation practices as a way for white neighborhoods to maintain high property values.

J.D. and Ethel Shelley challenged this unjust practice in 1945 when they purchased a home in St. Louis that had a racial restriction. Their case, Shelley v. Kraemer, ended up in the U.S. Supreme Court in 1948, where it was decided that racially restrictive covenants violated the Equal Protection Clause of the Fourteenth Amendment and were unenforceable.

Although the Shelleys won the case, discriminatory covenants were still enforced at a social level, and real estate agents often were encouraged to promote housing segregation. It was not until the Fair Housing Act of 1968, which prohibited “discrimination of sale, rental, and financing of dwelling or other housing-related transactions, based on race, color, national origin, religion, sex …” that racially restrictive covenants were banned privately and judicially.

Despite being illegal today, racially restrictive covenants unfortunately remain on many historic deeds and association governing documents because the process to remove them is difficult, time-consuming, and expensive. Without a streamlined process authorized by legislation, the amendment process can be costly and lengthy. Removing racially restrictive covenant typically requires the community to undergo an amendment process that includes engaging an attorney, following a process of notification to owners, calling a meeting, and most challenging getting a supermajority (more than 67%) of owners to participate in a vote to amend the covenant to remove the discriminatory covenant.

CAI believes community association boards should have a simplified process for removing these antiquated and unenforceable discriminatory covenants without a vote of the owners. We continue to advocate for state legislation that provides a process to remove restrictions deemed to be discriminatory under the federal Fair Housing Act or state anti-discrimination laws.  ​

While progress has been made to right past wrongs, there is a lot of work ahead of us. CAI encourages all communities to take immediate steps to remove discriminatory covenants and continue to promote racial equity.

Learn more about removing racially restrictive covenants, including model language for states to facilitate this process.

Read more about how some community associations and state legislatures have made strides to remove racially restrictive covenants in “True Colors” from CAI’s Common Ground magazine.