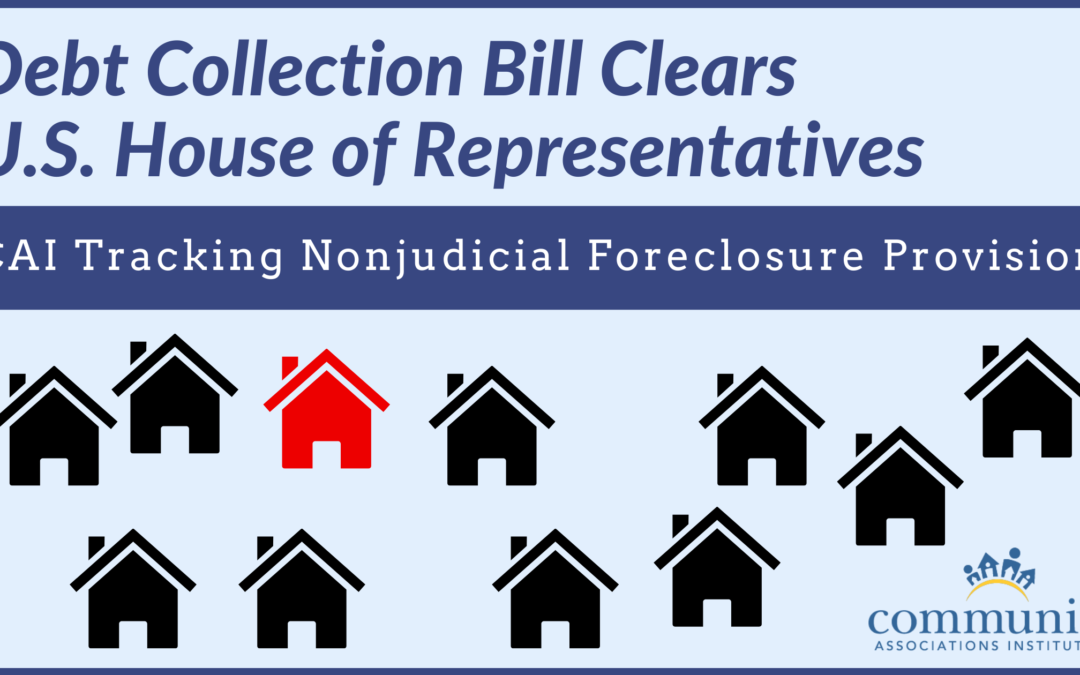 The U.S. House of Representatives recently passed H.R. 2547, the Comprehensive Debt Collection Improvement Act. The act introduced by House Democrats combines multiple bills amending the Fair Debt Collection Practices Act (FDCPA). CAI followed H.R. 2547’s development through legislative hearings in the House Financial Services Committee in March and the committee’s approval of the bill in April. The bill is important to CAI members not only for what is contained in the legislation, but also what is not included in the bill.

In 2020, the U.S. House passed legislation imposing a debt collection moratorium that would prevent community associations from collecting delinquent association assessments during the COVID-19 pandemic, which CAI members successfully opposed. Our advocates met with 15 influential U.S. Senate offices and sent more than 9,500 messages to Congress about the fundamental importance of assessments to the livelihood of the community association housing model.

Despite initial interest in approving a debt collection moratorium early in 2021, the House Financial Services Committee chose not to advance this proposal. H.R. 2547 does not include a moratorium on debt collection.

CAI’s public policy, Foreclosures by Community Associations to Collect Delinquent Assessments, strives to protect the financial well-being of community associations and residents by advocating for balanced and responsible laws that allow associations to collect delinquent assessments through a variety of means.

Failure to pay community association assessments leads to an unfair result because the association’s expenses must be paid regardless of the delinquency. When repayment plans, negotiations, and other efforts fail to resolve assessment delinquencies, CAI supports the right of associations to recover delinquent assessments through foreclosure.

While defeat of the proposed debt collection moratorium is important to the financial security of associations and residents, H.R. 2547 contains a provision that contravenes CAI’s public policy. CAI opposes language in H.R. 2547 reversing the unanimous opinion of the U.S. Supreme Court in Obduskey v. McCarthy & Holthus LLP (March 2020).

Although the decision is limited to the applicability of the FDCPA to law firms that engage in security interest debt collection, it is helpful to those firms that simply follow their state’s laws to enforce security interests and affirms that their state’s laws are not inconsistent with the FDCPA. The Supreme Court’s opinion in Obduskey was an unequivocal win for community association law firms seeking to initiate nonjudicial foreclosure proceedings to provide protection for and to allow associations to recover from the harms of delinquent assessments.

President Joe Biden issued a Statement of Administration Policy in support of H.R. 2547, indicating the administration’s full support for the bill and reversal of the Supreme Court’s opinion in Obduskey. Under current U.S. Senate rules, H.R. 2547 will require 60 votes to overcome an anticipated Republican filibuster, making Senate consideration of H.R. 2547 in its current form unlikely.

In the coming months, CAI expects the Senate Banking Committee, led by Sen. Sherrod Brown (D-OH), to hold hearings on FDCPA legislation. In 2019, Sen. Brown joined several Senate Democrats in filing an amicus brief in the Obduskey case, urging the U.S. Supreme Court to hold that law firms engaging in nonjudicial foreclosure proceedings be subject to the full suite of FDCPA requirements. Sen. Brown also led legislation supported by Senate Democrats to impose a moratorium on debt collection activities during the pandemic.

To stay up to date on FDCPA legislation and other federal issues affecting community associations, please subscribe to the CAI Advocacy blog.