CAI Exhibiting at the National Conference of State Legislatures 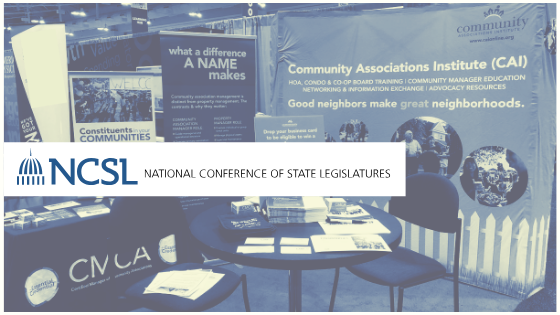 The most innovative and creative ideas for solving problems through legislation begin at the state level, which is why CAI joined more than 200 organizations—corporations, federal, state and local government agencies, trade associations, special interest groups, and consulting firms—at the National Conference of State Legislatures’ (NCSL) Legislative Summit in Nashville, Tenn., this week. More than 6,000 state legislators, legislative staff, federal officials, and others representing all 50 states and 20 foreign countries came through the exhibit hall, which allowed CAI to showcase its expertise as the leading international expert on the community association housing model as well as to develop new relationships with influential state government officials.

Even though many states have adopted a uniform act governing condominiums, homeowners associations, or cooperatives, all are regulated differently. With CAI tracking more than 1,500 pieces of legislation annually that directly impact community associations—and over 175 of those bills becoming laws—we need face-to-face interaction with lawmakers who shape public policy that affects our industry. Through this invaluable networking experience, CAI was able to discuss our current legislative priorities with state leaders and provide them with an understanding of the community association housing model.

CAI also highlighted our annual Constituents in your Communities campaign, which connects community associations with their elected officials to educate them on issues that matter most to homeowners. We were able to explain to state legislators and their staff the importance of attending events, meetings, and town halls in their local community associations.

As an organization, CAI benefits from the several hundred volunteer homeowners leaders, community managers, and business partners who serve their respective state legislative action committees. These committees work tirelessly to advocate for laws that support more effective governance and oppose misguided or troublesome legislation. Because of their efforts, we were able to provide legislators and their staff with information and resources on how to better serve their constituents living in community associations.