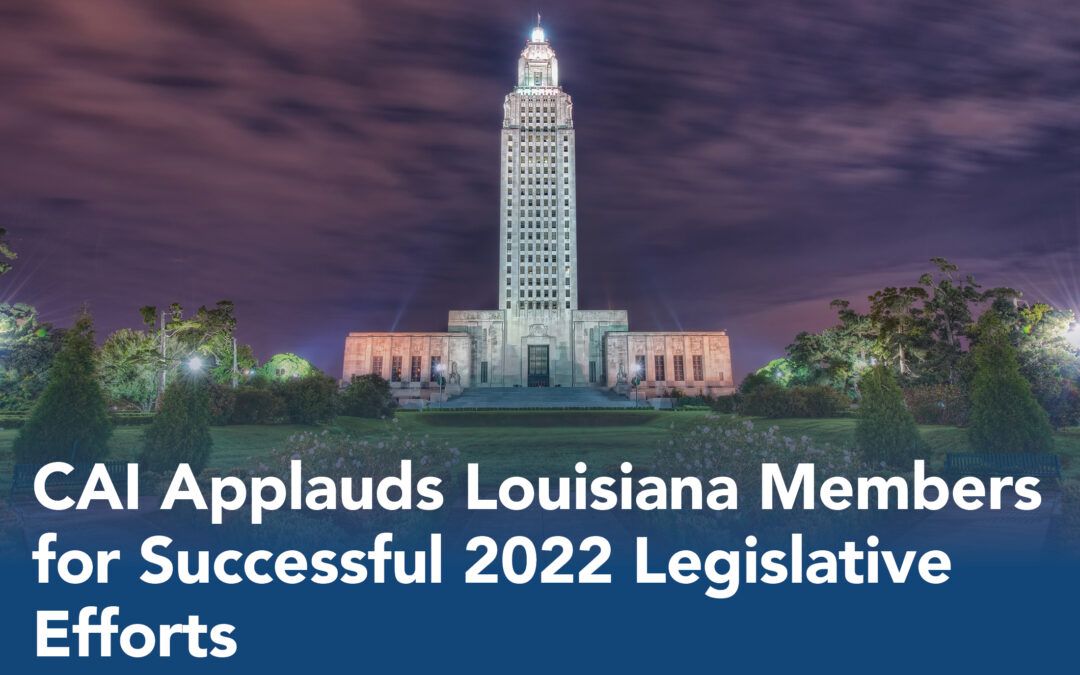 The Louisiana State Legislature had an unprecedented year, introducing a handful of bills impacting community associations, ranging from restrictive covenants issues and association lien processes, to the introduction of the Uniform Planned Community Act. Though there was no established CAI Chapter in Louisiana during the 2022 legislative session, many CAI members and advocates stepped up to ensure the best public policy possible was adapted for industry in the state.

CAI members, including management company CEOs, community managers, and attorneys, advocated on behalf of the community association housing industry with members of the state legislature. Though housing stakeholders such as realtors, homebuilders and bankers are more established with the legislature, CAI’s advocates made sure the voices of the approximately 158,000 Louisianians living in nearly 2,000 community associations were heard.

CAI retained a contract lobby firm, Adams Reese in Baton Rouge, to represent CAI and our members in front of the Louisiana Legislature. CAI’s Louisiana advocates worked with Allyce Trapp, of Adams Reese, to ensure that legislation supported successfully advanced and legislation opposed by the industry was stalled or amended. CAI’s Government and Public Affairs team would like to thank several advocates for their time and dedication, including Leanne Phillips, CMCA, AMS, PCAM, Ashley Alford, CMCA, Charlie Robinson, CMCA, and Jeffrey Harman, CMCA.

Due to the successful legislative efforts this spring, CAI is proud to announce the formation of the CAI Louisiana Chapter-In-Organization. On June 23, CAI and its Louisiana members held their first chapter event, hosting more than 70 industry representatives and featuring a legislative update on the incredible efforts of our advocates. CAI’s advocacy team looks forward to continuing to work with CAI Louisiana members and advancing the best public policy possible for the community association housing model in future legislative sessions.

Subscribe to CAI’s Advocacy Blog for the latest state and federal government actions impacting the community association housing model. Become a CAI Advocate, and get involved in CAI’s advocacy work. Sign up is easy. Join with other CAI Advocates today to make your voice heard!

If you have questions or comments, please contact CAI’s Government and Public Affairs team at government@caionline.org, and learn more about CAI’s advocacy priorities.