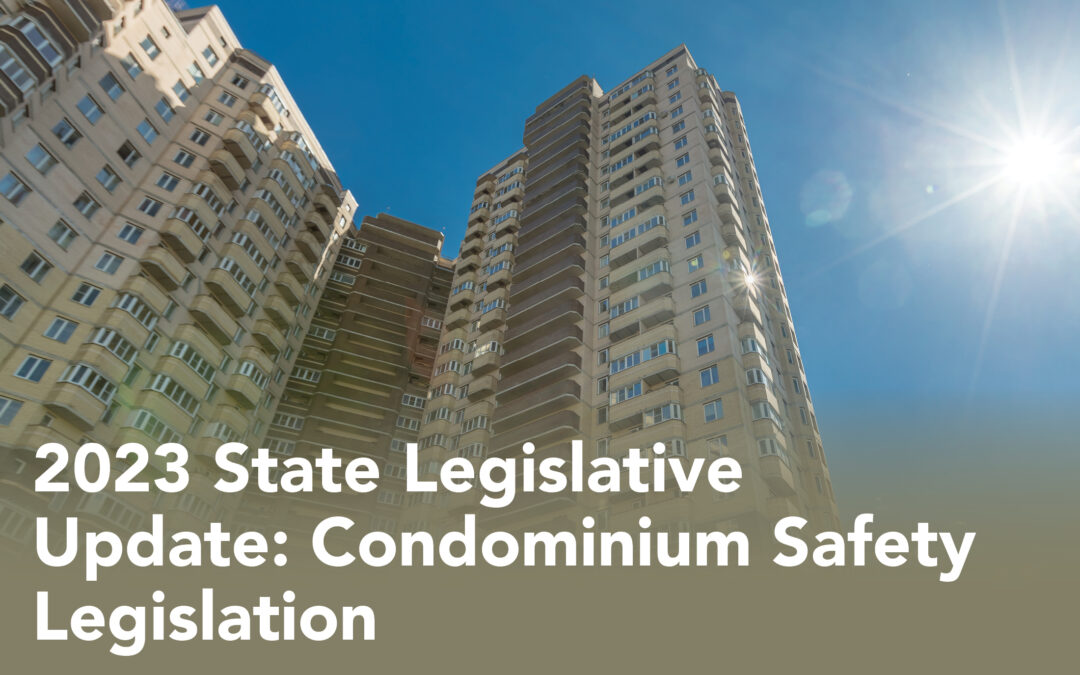 Following the tragic partial collapse of Champlain Tower South in Surfside, Fla., state legislatures continue to consider legislation in response to the tragedy. In late June 2021, CAI convened three specialized task forces to explore changes to laws and best practices that could help other communities prevent a similar event and provide solutions for legislators addressing building safety. CAI published public policy recommendations for reserve studies and funding; building maintenance; and structural integrity. CAI believes these recommendations should be considered for adoption to support the existing statutory framework for the development, governance, and management of community associations. Policy specifics may be found at www.condosafety.com.

To date in 2023, these state legislatures address the following legislative and policy issues:

Delaware. New Castle County Council (NCCC) in Delaware adopted Resolution No. 22-185, which establishes a task force to review issues relating to condominiums and other common interest community buildings and structures. A final report containing a summary of the task force’s work, including findings and recommendations, is due to the New Castle County Council, the county executive, and members of the task force by May 2023.

Maryland. The Maryland General Assembly has introduced HB 55, Local Government – Condominium and Homeowners Associations – Repair and Rehabilitation Funds. This bill authorizes a county or a municipality to establish a designated fund to provide for infrastructure repairs in a community subject to a condominium association or a homeowners’ association. It also requires certain property tax revenues be assigned to a fund created under this new act. The Maryland LAC will be supporting this bill with amendments.

New Jersey. New Jersey has begun the second year of a two-year legislative session, and the CAI NJ Legislative Action Committee is continuing its lobbying efforts for condominium safety legislation introduced in 2022. S2760/A4384 was introduced with the assistance of the NJ LAC. The bill concerns structural integrity regulations for certain residential buildings. The LAC worked closely with bill sponsors to draft this legislation, which addresses reserves and building inspections and uses public policy recommendations from CAI’s Condominium Safety Public Policy Report as a roadmap.

New York. The New York State Assembly has introduced A 889, to establish a property tax credit for class two cooperative and condominium buildings designated as safe after a facade safety program inspection. This legislation would amend the administrative code of the city of New York to abate and reduce taxes by an amount equal to all costs of a façade inspection safety program for class two cooperatives and/or condominium buildings. If passed, abatement shall be re-evaluated every five years after such inspections are performed.

Virginia. In 2022, the Virginia General Assembly enacted SB 740, Common interest communities standards for structural integrity and reserves for capital components. The law requires the Department of Professional and Occupation Regulation (DPOR) to establish a work group to study current laws addressing standards for structural integrity and maintaining reserves to repair, replace, or restore capital components in common interest communities. A report is due to the Virginia Senate and House Committees on General Laws on April 1.

Click here to view CAI’s advocacy resources, which you can share with your elected officials. Please contact CAI’s Government and Public Affairs team today with questions at government@caionline.org.