The Latest on Short-Term Rental Litigation and Legislation 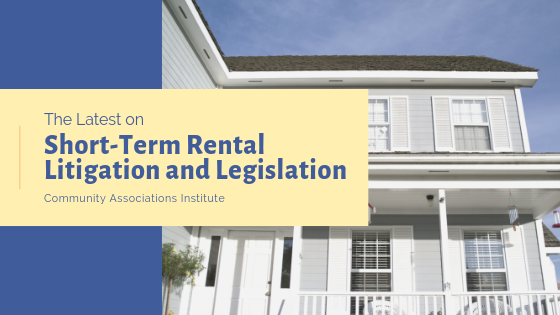 The sharing economy phenomenon and use of online platforms like Airbnb and VRBO, which facilitate short-term rentals, has significantly transformed the dynamics of renting property. The popularity of Airbnb and VRBO has created a unique housing market where short-term rentals provide considerable income for some community association owners, particularly those in vacation destination and resort areas. Community association owners, therefore, must determine what short-term rental policy is appropriate for their community.

Over the past year, litigation surrounding these online platforms has surfaced. In 2018, CAI was asked to submit three separate amicus curiae (friend-of-the-court) briefs detailing the positive and negative impacts short-term rentals have on community associations. Briefs were filed in Park La Brea A LLC v. Airbnb, Inc. and HomeAway.com, Inc. and Airbnb, Inc., v. City of Santa Monica explaining the impact of short-term rentals to the United States Court of Appeals for the Ninth Circuit.

In December 2018, the Park La Brea case was privately settled by the Apartment Investment and Management Company and Airbnb. Unfortunately, we will not know the terms of this agreement. Over the past few weeks, however, two courts have ruled that city ordinances imposing various obligations on companies such as Airbnb and HomeAway.com are not in violation of the Communications Decency Act (CDA)—an argument commonly used by these platforms.

In March 2019, the United States Court of Appeals for the Ninth Circuit opined a published opinion favoring our industry’s arguments in the HomeAway.com, Inc. and Airbnb, Inc., v. City of Santa Monica case. In 2017, Santa Monica amended its ordinance, imposing obligations on hosting platforms including collecting and remitting transient occupancy taxes, regulating disclosing listings and booking information to the city, refraining from booking properties not licensed and listed on the city’s registry, and refraining from collecting a fee for ancillary services. HomeAway.com and Airbnb filed a suit against the city, arguing that the ordinance was in violation of the rights Congress had given them under the CDA. The court disagreed with the online sites and ruled in favor of allowing the ordinance to remain.

Most recently, in April 2019, the United States District Court for the District of Massachusetts followed the Ninth Circuit’s lead, in the case of Airbnb, Inc. v. Boston, and ruled in favor of a recently enacted Boston ordinance imposing restrictions on Airbnb, including fines if the company collects a fee for a unit ineligible to be rented. Airbnb made the identical argument against this Boston ordinance as they did against Santa Monica’s ordinance, arguing that it was in violation of the CDA.

CAI agrees with the direction in which these decisions are moving. It is comforting to see the courts understanding these issues and affirming the regulations cities feel are appropriate for their constituents.

We recognize that there are some communities where short-term rentals are appropriate and desirable by residents. Therefore, regulations need to be consistent with the community association housing model of self-governance, where residents determine what is best for their community. Community associations should be allowed to tailor policies that meet the character, culture, and desire of their homeowners.

To learn more about CAI’s Short-Term Rental policy, check out our public policy page. Share this useful guide with residents in your community who choose to make their home available on sites like Airbnb and VRBO.