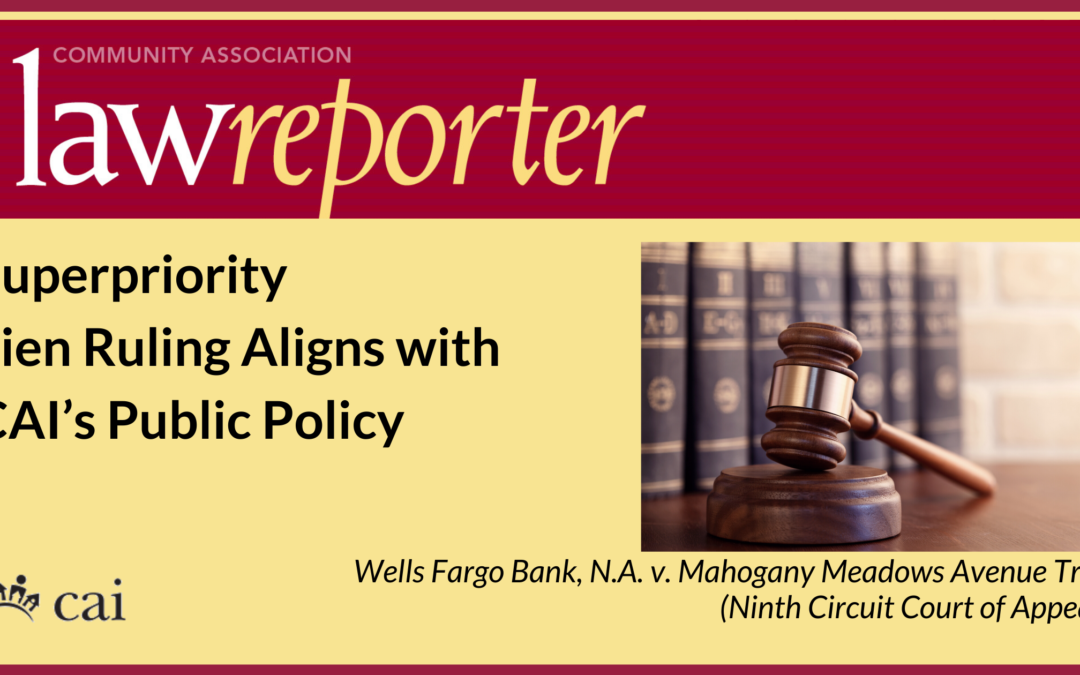 Note: This case is from a foreclosure that predates the COVID-19 pandemic. This case is a court ruling from a 2013 lawsuit. In March 2020, CAI announced a moratorium on foreclosure actions for community associations. The moratorium is extended through December 31, 2020.

On November 5, the Ninth Circuit Court of Appeals ruled that when a homeowners association foreclosed its superpriority lien as provided by the Nevada Uniform Common-Interest Ownership Act (UCIOA), there was no unconstitutional taking or due process violation.

In the case of Wells Fargo Bank, N.A. v. Mahogany Meadows Avenue Trust, a couple purchased a home in Las Vegas in 2008 and financed a mortgage through Wells Fargo. The owners became delinquent on their homeowners association assessments in 2011, causing the association to record a lien against the property.

Under Nevada law, a lien can only consist of the last nine months of unpaid association dues and any unpaid maintenance and nuisance-abatement charges. A modified version of the UCIOA provides a right of redemption opportunity for the bank up until five days before the foreclosure sale, specific notification requirements, and that an association’s lien holds superpriority status superior to all other liens on property.

Before an association can foreclose on its assessment lien, the UCIOA requires certain requirements be fulfilled, including notifying all other lien holders on the property with notice of the lien and pending foreclosure. The association satisfied each of these requirements.

The property was sold in foreclosure in 2013, after more than three years of unpaid assessments, causing Wells Fargo’s mortgage to extinguish. Following the sale and after failing to exercise rights during the right of redemption period, Wells Fargo sued the association, arguing that the foreclosure was invalid and the bank’s mortgage was still a lien against the property, as well as that their due process rights were violated.

The Takings Clause governs the conduct of the government, not private parties such as the association, and the Due Process Clause requires the government to provide reasonably calculated notice, under the circumstances, to apprise interested parties of the action and afford them an opportunity to present their objections.

The trial court held that the association properly followed the foreclosure requirements under UCIOA’s superpriority statute, and no illegal taking occurred. The bank’s due process rights weren’t violated, and the case was dismissed. Wells Fargo appealed to the Ninth Circuit, which affirmed the trial court’s decision and determined that UCIOA’s notice provisions did not pose a due process problem.

Currently, 21 states have priority lien statutes, which serve to preserve property values, balance the interests of homeowners in community associations and lenders, and are the reasonable solution to abandoned properties. Of these states, the Ninth Circuit has appellate jurisdiction over certain district courts in the following superpriority lien states: Alaska, Hawaii, Nevada, Oregon, and Washington, where this ruling will govern.

The lien provided for should apply only to monthly or periodic common expense assessments made by an association in accordance with its annual operating budget, together with reasonable attorneys’ fees and other costs of collection to recover this amount. CAI also supports the modification of any laws or secondary mortgage market guidelines restricting or discouraging lending institutions from making loans that are subject to the community association assessment priority lien.

Priority lien protects all homeowners within the community from rising costs related to extended non-payment of assessments from another owner. Foreclosure in community associations is a lengthy, complicated, and expensive process that provides opportunities for other lien holders, including the banks, to recover their outstanding debt. In this case, the bank failed to leverage its rights. Nevada’s community association lien foreclosure process typically takes more than one year from the notice of default.

This Ninth Circuit superpriority lien ruling was highlighted in the November issue of CAI’s Community Association Law Reporter, a monthly, members-only newsletter that provides a brief review of important court decisions impacting community associations throughout the U.S. Cases deal with developer liability, powers of the association, use restrictions, covenant enforcement, assessment collections, and much more.

In addition, CAI’s College of Community Association Lawyers prepares a yearly case law update. The database includes summaries of these cases, along with their references, case numbers, dates, and other data.