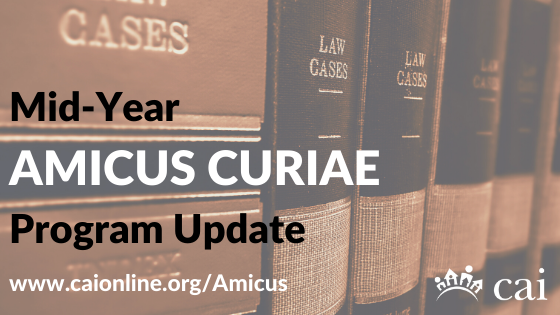 Community Associations Institute files amicus curiae, or “friend of the court” briefs, in federal or state cases that address issues of significant importance in community association law. CAI’s amicus curiae efforts enable us to share our expertise and educate a court about the legal and policy issues in pending appellate litigation. Characteristically, court cases where a CAI amicus brief may be appropriate tend to follow issues that affect homeowners associations and condominiums and match the public policy and legislative trends CAI is following, such as short-term rentals, lien foreclosures, disclosure document fees, and more.

In 2020, CAI has received eight amicus brief requests from across the country and filed five briefs in four different jurisdictions. From super priority lien to statute of repose and interpretation of the Uniform Condominium Act, CAI’s Amicus Review Committee has had a relatively busy year even with court closures across the country due to the COVID-19 pandemic.

In 2019, the committee and the CAI Board of Trustees received and approved a request for amicus curiae in a case pending in front of the Alabama Supreme Court. An Alabama state trial court had previously ruled that, in accordance with the Alabama Uniform Condominium Act, a condominium’s declaration had not preserved the right for a developer to retain several commercial units in the condominium, which the developer had created regardless of the fact the declaration clearly stated the units were to be used only for residential purposes. The developer appealed this ruling to the Alabama Supreme Court, and the association requested support.

The Uniform Condominium Act is currently adopted in 15 states. CAI supports and recommends consideration and adoption of one or more of the Uniform Community Association Acts in all states. In the months following the association’s amicus request, CAI’s committee gathered a task force of legal experts who are CAI attorney members from these states to help develop the strongest arguments to present to the Alabama Supreme Court supporting the trial court’s interpretation of the Alabama Uniform Condominium Act, as well as the association. The brief was filed in April and, due to the COVID-19 pandemic, the case is still awaiting trial.

Currently, the North Carolina Court of Appeals has three pending cases considering whether the North Carolina Marketable Title Act, N.C.G.S. § 478-1, et seq., has extinguished all protective covenants other than the residential use restriction. CAI’s committee and theBoard of Trustees approved an amicus curiae brief to be filed in each of these cases explaining the implications these cases will have on the community association housing model. In addition to filing amicus briefs on this issue, 25 states in the U.S. have the Marketable Title Act, which led the CAI Government and Public Affairs Committee to draft a Marketable Title Act public policy, which is currently under committee review.

In addition to reviewing standard issues the industry litigates year to year, 2020 brought a new crop of issues that now impact community associations. Following states of emergency being issued across the country in March, many governors and legislatures issued bans on evictions and foreclosures for specific periods of time, as well as court closures for safety purposes. CAI is beginning to receive requests to consider filing amicus briefs in pending cases fighting these bans because of the fact associations do not have access to the courts and any right to due process during the bans. As these orders continue to be extended in many states, CAI continues to track their impact on community associations’ abilities to collect unpaid assessments.