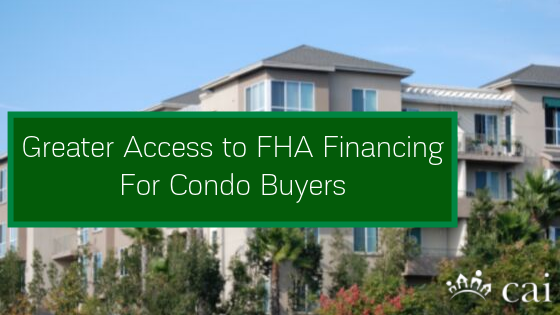 HUD data show condominium unit mortgages currently account for fewer than 2% of all FHA-insured mortgages, exposing a critical failure of federal housing policy. The changes announced by FHA are intended to allow the agency to expand homeownership for many Americans.

Millions of homebuyers could benefit from the changes. The Foundation for Community Association Research estimates 40% of the nation’s 27 million community association households call a condominium home, accounting for approximately 10% of the nation’s housing stock.

“Following the housing crisis in 2008, the FHA condominium approval process severely impacted access to FHA-insured mortgages, which hurt homeowners and household formation. This is counter to FHA’s statutory mission—its reason for being,” says Dawn M. Bauman, CAE, CAI’s senior vice president for government and public affairs. “A balanced, data-driven condominium approval process at FHA has been a long-term public policy priority for CAI. Today’s announcement marks a return for FHA as  a key long-term partner for condominium associations.”

Key elements of the newly released approval process include: