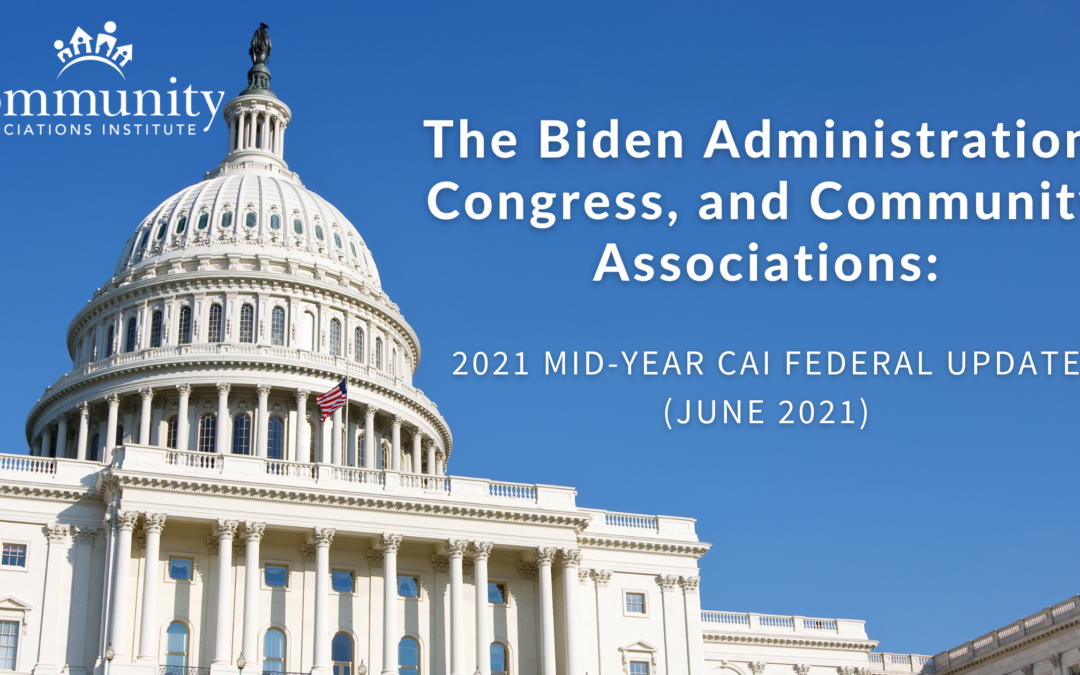 The transition to a new presidential administration and a closely divided Congress has not slowed the pace of federal legislation in 2021. In March, President Joe Biden’s signature COVID-19 relief plan, the American Rescue Plan Act, became law. As federal policymakers discuss this and other proposals, this federal update outlines how CAI advocates are working to advance key CAI priorities.

CAI advocates secured an important advocacy win in the American Rescue Plan Act with the establishment of the Homeowner Assistance Fund. We are now pressing members of Congress to include community association disaster relief legislation in the American Jobs Plan. Other issues affecting community associations under discussion by federal policymakers are being closely monitored, including federal fair housing and debt collection policies.

The Homeowner Assistance Fund helps homeowners who lost jobs and income due to the COVID-19 pandemic catch up on missed mortgage and housing payments. The $9.9 billion national program is managed by the U.S. Department of the Treasury and is administered by state housing finance agencies.

CAI advocates secured language in the American Rescue Plan Act to include delinquent community association assessments as housing costs eligible to be paid through the Homeowner Assistance Fund. This marks the first time the federal government has expressly elevated delinquent community association assessments to the same level of importance as delinquent mortgage payments in emergency housing assistance legislation.

The Homeowner Assistance Fund already disbursed more than $700 million to state housing finance agencies to help eligible homeowners avoid foreclosure. All community association homeowners with assessment delinquencies due to COVID-19 job and income losses should be encouraged to contact their state housing finance agency to determine if they are eligible for relief through the Homeowner Assistance Fund.

The Disaster Assistance Equity Act will require FEMA to provide community association homeowners the same disaster recovery assistance as non-association homeowners. Under this legislation, if a local government determines disaster debris in a community association is a threat to the life, health, and safety of residents, FEMA will be required to reimburse the local government’s costs to remove these threats as is currently done for non-association neighborhoods. The legislation also will allow condominium and housing cooperative homeowners to use FEMA disaster assistance to repair building roofs and other critical building infrastructure in the same manner as single-family homeowners may do under current FEMA rules.

U.S. Rep. Jerry Nadler of New York is leading efforts to pass the Disaster Assistance Equity Act in Congress. CAI advocates expect Rep. Nadler will be joined by several Republican and Democrat representatives when the legislation is introduced in the U.S. House of Representatives this summer. Rep. Nadler will work to include the Disaster Assistance Equity Act in the American Jobs Plan Act, which Congress also will take up this summer.

At President Biden’s direction, the 2015 Affirmatively Furthering Fair Housing (AFFH) regulation requiring state and local governments to improve fair housing access in communities has been reinstated. The president also is supporting a review of local government zoning policy to determine how zoning rules have contributed to the national housing shortage, estimated by federal mortgage finance company Freddie Mac to be 3.8 million homes.

In May, the U.S. House of Representatives narrowly approved H.R. 2457, the Comprehensive Debt Collection Improvement Act. CAI is watching one provision of the legislation that overturns the unanimous opinion of the Supreme Court in Obduskey v. McCarthy & Holthus, LLP., that governs how the Fair Debt Collection Practices Act applies to non-judicial foreclosures. CAI supported the Supreme Court’s opinion in the Obduskey case, which provided clarity for community association attorneys involved in non-judicial foreclosure actions. H.R. 2457 is controversial, and the U.S. Senate is unlikely to approve the legislation.