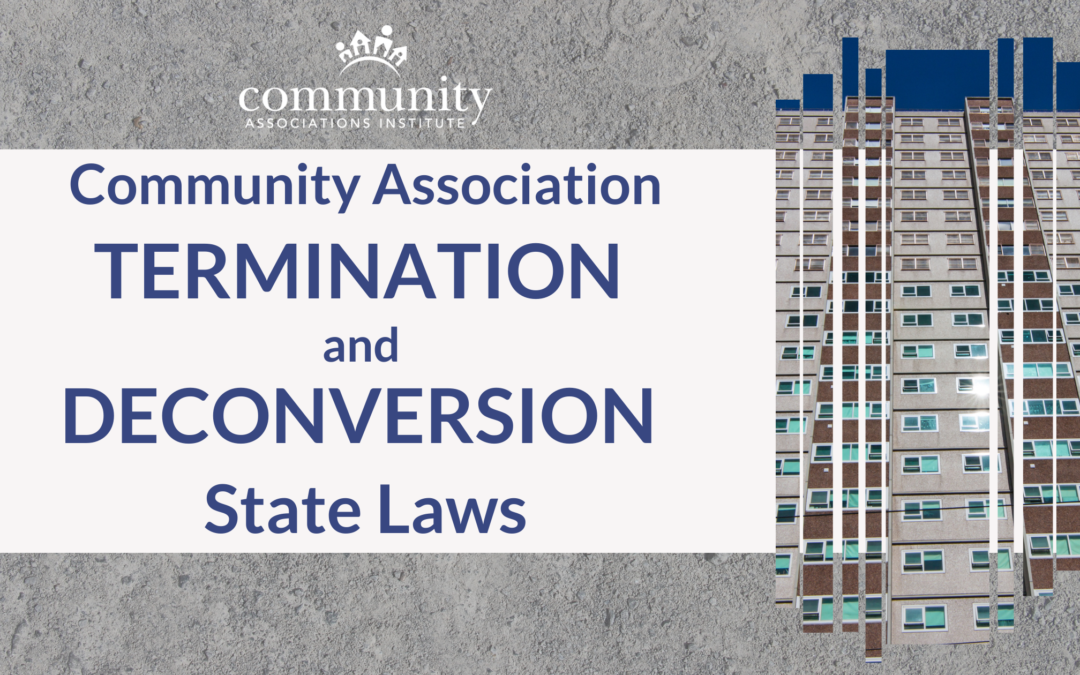 With many community association buildings in the U.S. beginning to age beyond the point of regular repairs, the discussion about association termination procedures is becoming more common. Condominium termination and deconversion is the process of bulk-selling a condominium property to a third party to be turned into rentals. According to CAI’s Guiding Principles for Community Association Governing Documents: A Resource For Lawyers, the standard termination approval process of a condominium building requires a vote of 80% of the unit owners.

Many states include the owner approval voting percentage in their state condominium or common interest community act approved by the Uniform Law Commission and American Bar Association. Other states opt to have the community association’s declaration establish this percentage. ​​​​​​​​​​​​​​​​​

It is important for association boards and owners to understand which laws govern how their association can be terminated or deconverted. Terminating an association is one of the biggest decisions an association will make in its lifetime, and it is critical that proper procedures are taken.

“Terminating a condominium is not for the faint of heart. In addition to ensuring fairness for both unit owners who wish to leave and unit owners who wish to remain, it is essential to ensure fairness in the allocation of proceeds among the unit owners,” says Robert M. Diamond, a fellow in CAI’s College of Community Association Lawyers (CCAL). “Most of the applicable statutes are insufficiently nuanced and do not address the infinite possible situations causing and resulting from termination. Successfully terminating a condominium requires well-organized association leadership and a creative and detail-oriented attorney. Due to physical and economic obsolescence, we will be terminating many more condominiums in the near future, so we need to be educated on how best to do it.”

Section 2-118, termination of a condominium or common interest community, in both uniform acts, states that a condominium or common interest community may be terminated only by agreement of at least 80% of unit owners, or any larger percentage the declaration specifies, and with any other approvals required by the declaration. The declaration may specify a smaller percentage only if all of the units in the associations are restricted exclusively to nonresidential uses.

CAI advocates for the adoption of the UCIOA. In those states where it is not possible to adopt the act in its entirety, CAI supports and recommends consideration of appropriate portions of the law. Consult with your association’s attorney if considering a termination.