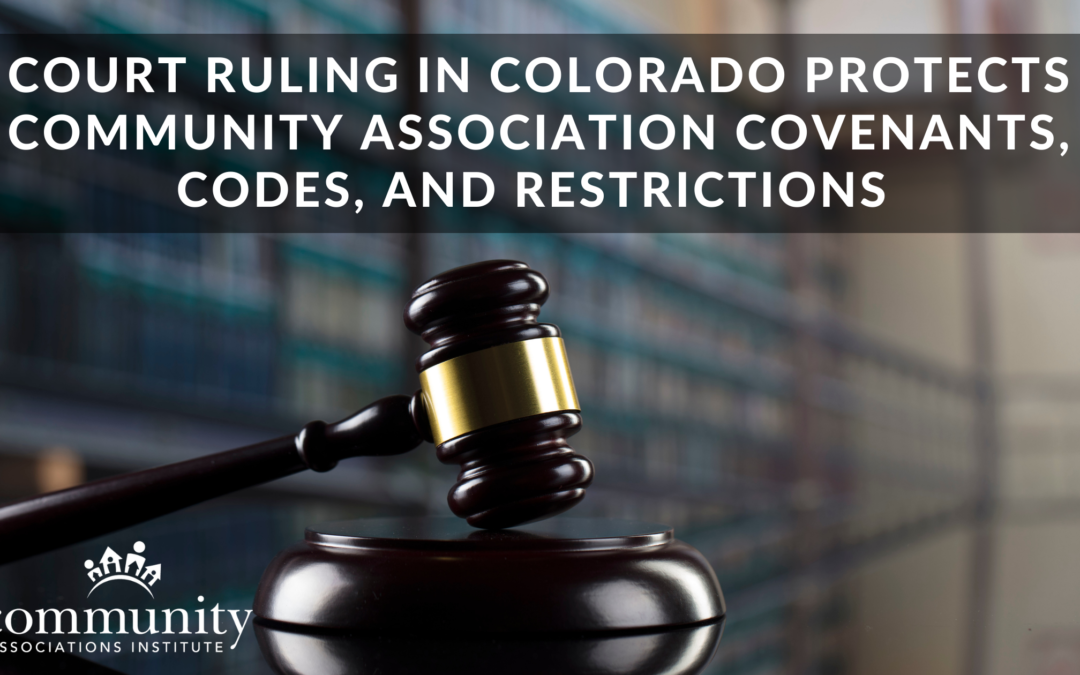 The Colorado Court of Appeals on Aug. 12 determined that a town of Vail ordinance requiring condominium units to “remain in the short-term rental market” was, on its face, discriminatory and violated the Colorado Common Interest Ownership Act (CCIOA), and a condominium association was not obligated to enforce the law.

In 1987, the town of Vail modified a previously enacted ordinance allowing for the development of Phase V of the Village Inn Plaza. The modified ordinance included a new restriction that required condominium units to “remain in the short-term rental market to be used as temporary accommodations available to the general public.” A year later, the association recorded a condominium declaration creating a condominium project within Phase V with similar restrictions to the ordinance. In the following years, the association amended their rules to remove this specific restriction.

In 1991, CCIOA was adopted. The act includes a section (38-33.3-106) that states that no ordinance may “impose any requirement upon a condominium or cooperative which it would not impose upon a physically identical development under a different form of ownership.” Through this statute section, the Colorado General Assembly recognized the need to protect condominium properties by explicitly forbidding discrimination against the condominium form of ownership.

In 2015, the town of Vail filed a lawsuit against the association arguing that the amended rules violated the original 1987 ordinance, that CCIOA does not apply retroactively to the 1987 ordinance, and that the restriction is not facially discriminatory and should apply to the condominium. In June 2018, the Eagle County District Court held that CCIOA applies in this instance and the ordinance is facially discriminatory against the condominium form of ownership. The Colorado Court of Appeals affirmed the ruling. Because the Town of Vail’s ordinance discriminates solely on the basis of ownership of real property in a condominium, the District Court originally acted properly in dismissing Vail’s amended cross claim, as argued in two national amicus briefs, drafted by CAI attorney, William H. Short, Altitude Community law, and filed by CAI through this case’s appellate process.

According to Stephen Marcus, co-chair of the CAI Amicus Committee and a retired attorney in the Boston area, the Colorado appeals court got this decision right. “For decades, courts across the country have recognized that condominiums are simply a form of ownership, not another type of use. The same logic that the courts applied to decisions not permitting condominiums to be a different form of use for zoning purposes applies in this case,” he says. “Municipalities must apply the same rules equally to all forms of ownership, including condominium complexes.”

Robert M. Diamond, co-chair of the amicus committee and an attorney in the Washington, D.C., area, echoes the sentiments: “The decision is important not only because it supports the freedom of property rights, but even more importantly, it means that local jurisdictions cannot treat condominiums differently than other type of property.”

Community Associations Institute supports and recommends consideration and adoption of the one or more of the Uniform Community Association Acts, including the Uniform Common Interest Ownership Act, by all states. UCIOA is a basic statute for creating, managing, and terminating condominium, planned community, and real estate cooperatives. Currently, nine states have enacted either the 1982 or 2008 version of the UCIOA.

Amicus curiae briefs allow CAI to educate a court about important legal and policy issues in cases related directly to the community association industry. If your association, municipality, or state is being faced with a poorly formulated legal opinion, please consider contacting CAI and submit a request for an amicus brief. If you have any questions, contact Phoebe E. Neseth, Esq., at pneseth@caionline.org.