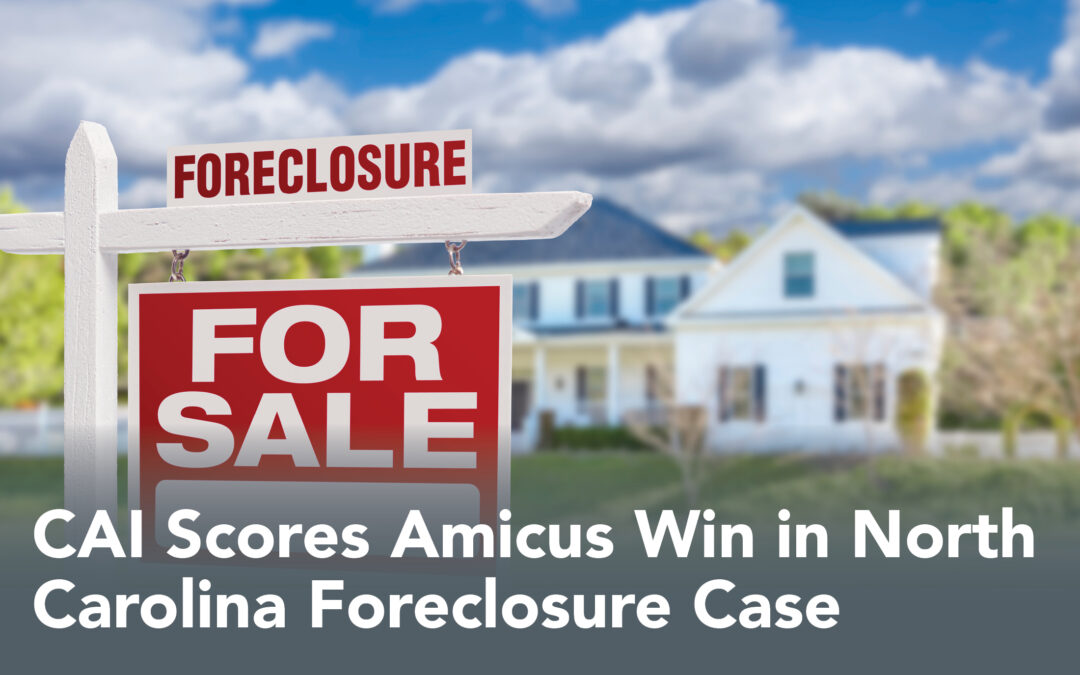 “This is an important decision for North Carolina communities because the supreme court applied the plain language of the condominium act concerning power of sale foreclosures and its applicability to a condominium formed prior to the effective date of the statute,” says Jones, a fellow in CAI’s College of Community Association Lawyers (CCAL) and chair of CAI’s Business Partners Council. “Although the decision concerned a condominium, it also will have an impact on planned communities because of similar language in the Planned Community Act. This decision confirms that any community formed prior to the effective date of the applicable statute, which does not have an express provision to the contrary, may utilize the power of sale foreclosure process in the collection of assessments.”

The issue is whether a condominium formed prior to the enactment of the North Carolina Condominium Act of 1986 has the power of sale for foreclosure (pursuant to the act) for nonpayment of an assessment. The supreme court ruled that the court of appeals erred in its judgment by failing to apply the plain language of the act and the fact the declaration does not contain a provision “expressly to the contrary” of the power of sale for foreclosure permitted by the act.

This case stems from a 2018 claim of lien by a condominium against three units owned by the same owner. The condominium association alleged that assessments and other charges were unpaid for more than 30 days. The trustees initiated a power of sale foreclosure. The superior court authorized the sale, which was affirmed by the trial court. The owner appealed the sale to the North Carolina Court of Appeals. The condominium development at the forefront of this case filed its declaration in 1982. The unit owner argued that since the condominium declaration was signed in 1982 and not amended to bring it within the provisions of the act, the condominium lacked the power of sale for foreclosure.

In the brief, CAI explains that when the North Carolina legislature enacted the legislation, it understood certain provisions of the statute should be applicable to all condominiums absent some express intention to the contrary. “CAI’s amicus curiae program was instrumental in providing the supreme court with valuable information regarding this issue and assisting the court in understanding the implications of the decision on the entire community association industry,” says Jones.

Robert Diamond, co-chair of CAI’s amicus curiae program, an attorney with Reed Smith in McLean, Va., and a CCAL fellow, says the North Carolina Supreme Court properly construed the applicability clause of the North Carolina Condominium Act. “This essential provision makes clear that changes to the statute apply to all condominiums within the state but only if they do not invalidate the existing provisions of the condominium documents. This ruling is important because it should be precedent for all the jurisdictions adopting the Uniform Condominium Act or the Uniform Common Interest Ownership Act which have the identical applicability provision. Owners in North Carolina can now take advantage of changes to the condominium act with the assurance that the carefully tailored provisions of their documents will not be overturned by the legislature,” he says.

Stephen Marcus, co-chair of CAI’s Amicus Curiae Program and a CCAL fellow in Massachusetts, also adds that the decision permits associations to benefit from the retroactive provisions of the act. “This will apply to not only the power of sale foreclosure provisions but also the various other provisions of the act that state they are to be applied retroactively unless the declaration provides information to the contrary,” he says.

Amicus curiae briefs allow CAI to educate a court about important legal and policy issues in cases related to the community association industry. If your association, municipality, or state is facing a poorly formulated legal opinion, please contact CAI and submit a request for an amicus brief. If you have any questions, contact Phoebe E. Neseth, Esq., at pneseth@caionline.org.