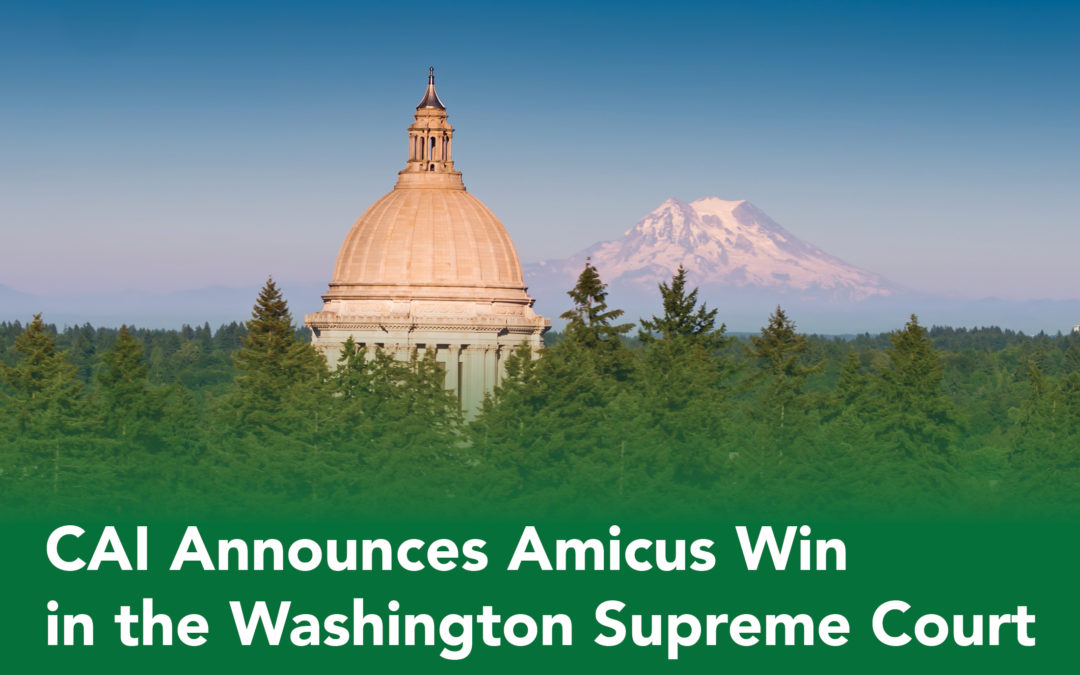 The Supreme Court of the State of Washington determined that a homeowners association’s governing documents grant the association broad discretion in setting assessments and that its decision on assessments is entitled to substantial deference. The court affirmed in part, reversed in part, and remanded to the trial court for reinstatement of its summary judgment order in favor of Hat Island Community Association and for any further necessary proceedings consistent with this opinion.

In May 2021, CAI’s Amicus Curiae Committee approved and filed an amicus brief authored by Anthony Rafel, managing partner at Rafel Law Group in Seattle and a fellow in CAI’s College of Community Association Lawyers (CCAL). “The issue was whether equal per lot general assessments proposed by the board and ratified by the members were “equitable,” as required by the governing documents, where some lots were developed with homes and others were not,” according to Rafel.

This case stems from a 2014 lawsuit in the Superior Court of the State of Washington, where a homeowner sued Hat Island Community Association in Snohomisi County. The homeowner, who owned more than 270 lots individually and derivatively on behalf of the association, argued that the board was in violation of the governing documents for failing to levy assessments on an equitable basis; he also made a number of other claims that were largely dismissed via summary judgment. The trial court dismissed the homeowner’s claim and cited the business judgment rule as its reasoning. The homeowner appealed the decision to the Washington Court of Appeals, which reversed the trial court’s decision, and applied judgment for a board absent evidence of fraud, dishonesty, or incompetence.

In the brief, CAI explains that the Washington Court of Appeals’ holding that the business judgment rule applies only to limit the liability of individual directors calls that fundamental rule into question and creates significant liability for all community associations in the state and could set bad precedent on a national level regardless of the state law being applied. The two principal issues addressed in are whether the business judgment rule applies to the association and whether it requires that a board’s decisions be “reasonable.”

While the court did not rule on whether the business judgment rule applies in this matter, it did affirm that the homeowners association’s governing documents grant it broad discretion and substantial deference in setting assessments and that the homeowner did not show that the assessments were not equitably assessed. “The court reasoned that, when a homeowners association makes a discretionary decision in a procedurally valid way, courts will not substitute their judgment for that of the association absent a showing of fraud, dishonesty, or incompetence (i.e., failure to exercise proper care, skill, and diligence). The court adopted this rule ‘in recognition of the respect due to the self-governance of homeowners associations, the importance of finality in budgeting, and the avoidance of interfering with associations’ ability to meet their financial obligations,’” says Rafel. Based on this ruling, the court decided there is no cause to consider whether the business judgment rule applies.

“This is a major win for associations in Washington state and may be helpful to associations nationwide in resisting challenges to discretionary decisions of the board or the membership,” Rafel explains. “The ruling protects association decisions when they are made according to the procedures specified in the governing documents, and puts the burden on challengers to show fraud, dishonesty, or incompetence.”

Amicus curiae briefs allow CAI to educate a court about important legal and policy issues in cases related to the community association housing model. If your association, municipality, or state is faced with a poorly formulated legal opinion, please contact CAI and submit a request for an amicus brief. If you have any questions, contact Phoebe E. Neseth, Esq., at pneseth@caionline.org.