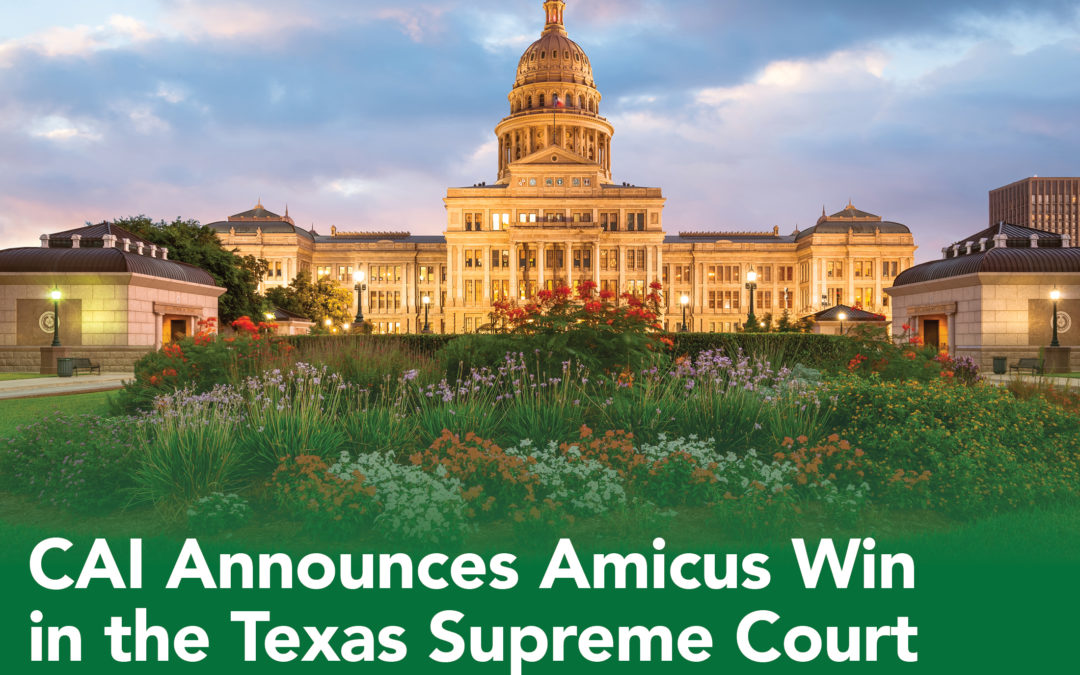 The Supreme Court of Texas determined that a party may qualify as a “prevailing party” under the Uniform Condominium Act by the parties who bring claims or successfully defend against claims. This case concerned whether a defendant condominium association is entitled to attorneys’ fees after obtaining a take-nothing judgment on claims by a plaintiff unit owner.

In December 2021, CAI’s Amicus Curiae Committee and the CAI Board of Trustees approved and filed an amicus brief authored by Frank O. Carroll, a CAI member and of counsel with Winstead in Austin, Texas. “Uniform laws, such as the Uniform Condominium Act, require uniform interpretation to bring stability and predictability to the real estate market. In reversing the intermediate court of appeal, the Texas Supreme Court has brought Texas condominium law back in line with the rest of the country,” says Carroll. “The Court acknowledged that associations that successfully defend claims can recover their attorneys’ fees, shifting the financial burden of litigation to those who bring unsuccessful claims and away from communities and their residents.”

This case stems from a lawsuit where the Sunchase IV Homeowners Association on South Padre Island and its board were sued in a state district court in south Texas by the owner of a condominium unit pertaining to a dispute over repairs to the unit and to the common areas. After much litigation and a two-week jury trial, the petitioners prevailed—obtaining favorable declaratory relief from the trial court and favorable jury findings on all the unit owner’s contract and tort claims. The trial court signed a final judgment incorporating the jury’s findings and awarding petitioners their attorneys’ fees of $135,029.94, pursuant to Texas Property Code § 82.161.

The court of appeals affirmed the lower court’s judgment, but it reversed the award of fees on the grounds that the board was not considered one of the “prevailing parties” under section 82.161(b) of the Texas Property Code and the board counterclaim for declaratory relief did not state an affirmative claim. The Texas Supreme Court reversed the intermediate court of appeals decisions reserving the award of fees and providing them back to the association.

“Not only did the Texas court interpret the act properly but this decision will result in owners in community associations and boards resolving disputes without taking precious time from judges and courts. The decision is good for community association owners and boards,” says Stephen Marcus, a Boston-based attorney, co-chair of CAI’s Amicus Curiae Committee, and a fellow in CAI’s College of Community Association Lawyers (CCAL).

“The court determined that when an owner sues a community association for violating the governing documents, and the defendant association prevails, the association is the prevailing party entitled to its legal fees even though it neither sought nor was awarded any affirmative judgment. This decision will likely set a precedent in all the jurisdictions adopting the Uniform Condominium Act and its related statutes,” explains Diamond.

Community association boards regularly face challenging and complex issues that can spark strong emotions. Neighbors working together to resolve differences takes work and commitment, resulting in stronger and more harmonious communities. Lawsuits for these types of neighbor-to-neighbor disagreements should be a last resort.

Amicus curiae briefs allow CAI to educate a court about important legal and policy issues in cases related to the community association housing model. If your association, municipality, or state is faced with a poorly formulated legal opinion, please submit a request for an amicus brief. If you have any questions, contact Phoebe E. Neseth, Esq., at pneseth@caionline.org.