Bringing It Home – Constituents in Your Community 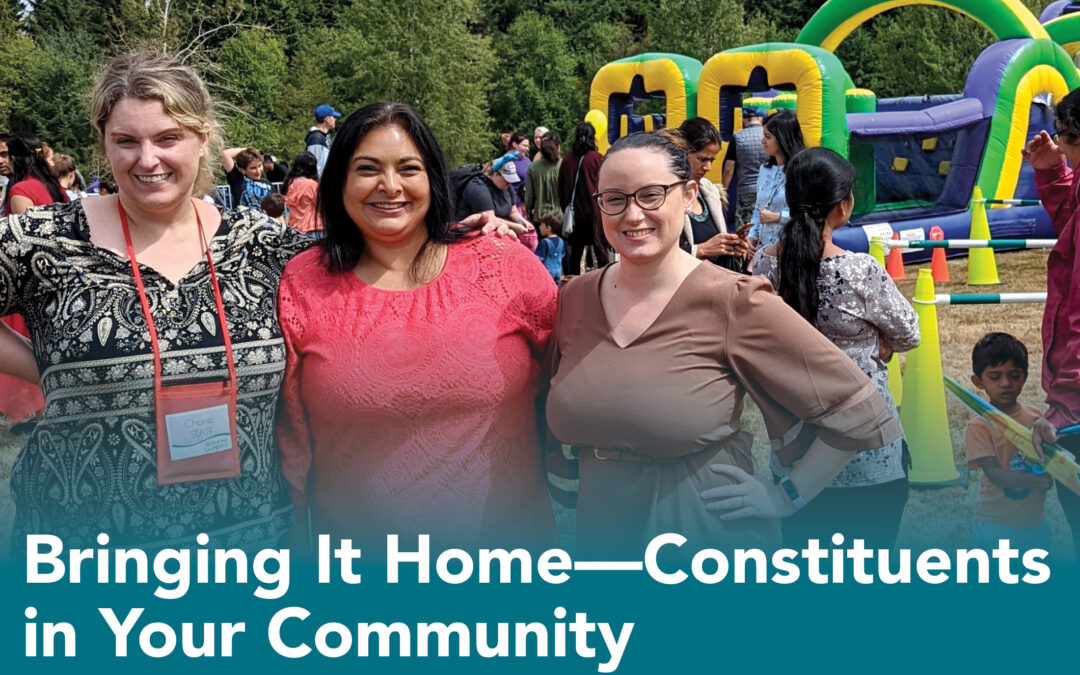 Communities are gearing up to host their annual meetings next month, along with fall festivals, trunk-or-treating, and other seasonal events. CAI’s Government and Public Affairs team wants to help you increase the impact of your event by inviting elected officials to attend. CAI’s Constituents in Your Communities campaign is an opportunity for community associations and community association management companies to bring advocacy into their backyards.

CAI represents the 74 million Americans who live and work in community associations nationwide. For six years, we’ve helped bring legislators to constituent associations with Constituents in Your Communities.

535 Members of Congress
Each state has two senators and between three and 53 representatives on Capitol Hill. During the federal legislative session, most members of Congress live and work in Washington, D.C., but go back to their home districts as needed.

40 Days
The average member of Congress reports they’ll spend 40 days during their mid-year recess in their home district, and they want to pack their schedule with as many meetings and conferences with constituents as possible.

94%
The Congressional Management Foundation’s Citizen-Centric Advocacy: The Untapped Power of Constituent Engagement reports 94% of lawmakers say an in-person visit from a constituent would influence them on an issue they’re undecided on.

These numbers add up to your community’s chance to make a difference in legislation that affects the hundreds of thousands of associations across the nation. Since 2022, more than 13,000 CAI advocates have sent nearly 28,000 messages to their legislators. Take a moment to join the CAI Advocacy movement! Already an advocate? Consider inviting your legislator to an event in your community!

Whether you’re hosting a townhall, pool party or potluck, it’s a great opportunity for legislators to connect with constituents and hear personal stories about how legislation affects their lives. According to the  Citizen-Centric Advocacy: The Untapped Power of Constituent Engagement report, the most impactful message for legislators is how legislation may affect their constituents’ personal lives — it’s also the type of information they hear the least. Seeing successful examples of the community association housing model is a great way to encourage lawmakers to support them in the legislature.

CONSTITUENT IN YOUR COMMUNITIES IN ACTION!

On August 27th, 2022, CAI members of the Redmond Ridge ROA in Redmond, Wash., had the opportunity to speak to state Sen. Manka Dhingra at their summer festival. Redmond Ridge ROA includes more than 1,200 single-family homes, townhomes, and condominiums northeast of Seattle. Thanks to the work of the staff of Redmond Ridge, and the Washington LAC, Sen. Dhingra met with more than 300 members and discussed important issues like zoning laws and accessory dwelling units. Special thanks to Redmond Ridge’s Communications Director Chanel Merrit and the Washington LAC lobbyist Krystelle Purkey for planning the event and inviting Sen. Dhingra.

It’s not too late! To participate in Constituents in Your Communities, tell us a little about your event here and our team will do the rest. www.caionline.org/Advocacy/TakeAction/Pages/Congressincommunities.aspx