What the 2022 Election Means for Community Associations 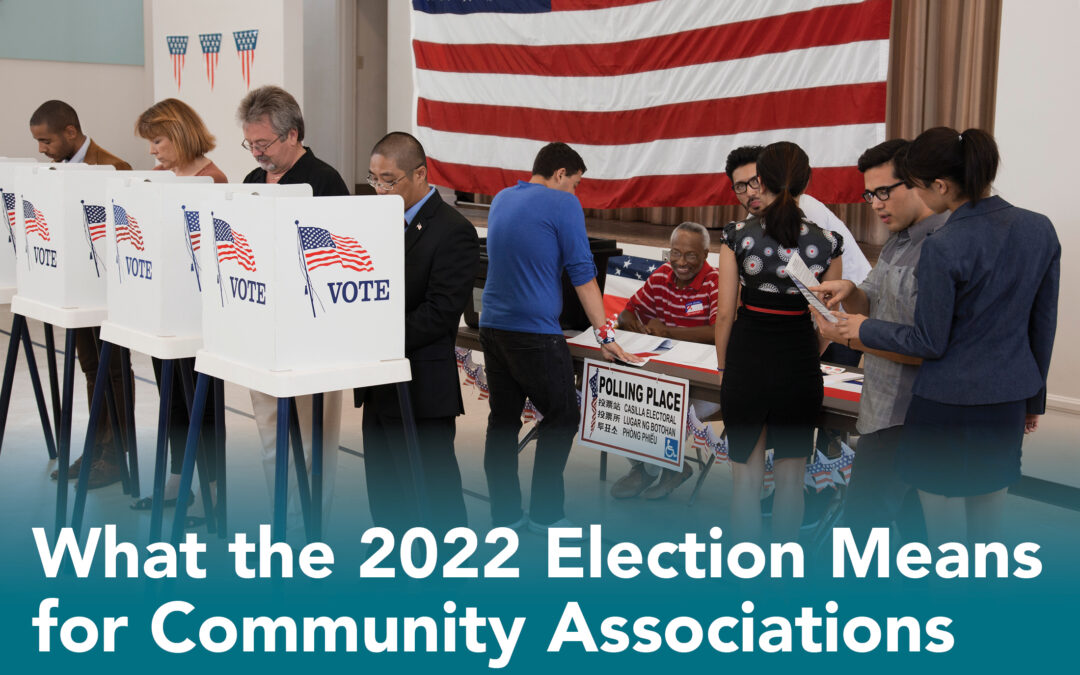 When the 118th Congress convenes in January, the House of Representatives and the Senate will be controlled by narrow majorities. Media outlets project Republicans will win the House of Representatives, while control of the Senate is too close to call. Only one result is certain: Congress will be almost evenly divided between Democrats and Republicans.

CAI is examining what the results will mean for community associations.

Under a Republican majority in the House of Representatives, U.S. Rep. Patrick McHenry, R-N.C., will replace U.S. Rep. Maxine Waters, D-Calif., as chair of the Committee on Financial Services. Decisions regarding CAI legislative priorities on Fannie Mae and Freddie Mac temporary condominium guidelines and financing condominium repairs are overseen by this committee. U.S. Rep. Sam Graves, R-Mo., will lead the Committee on Transportation and Infrastructure, which has jurisdiction over the Disaster Assistance Equity Act.

Ballots in three races to determine control of the Senate are still being counted. The political party that wins at least two of the three remaining undecided seats in Arizona, Georgia, and Nevada will have a majority. If the political parties split outcomes in Arizona and Nevada, control of the Senate will come down to a Dec. 6 runoff election in Georgia.

In a divided Congress, legislation requires broad, bipartisan support to be enacted into law. CAI’s federal priority issues draw support from Republicans and Democrats. CAI will continue to press for practical, effective, good-government solutions for community associations and association residents across the country. Additionally, a divided Congress means partisan or ideological legislation harmful to community association interests is less likely to become law.

A change in Republican leadership of the Senate Banking Committee has the potential for a positive impact on CAI federal priorities. U.S. Sen. Tim Scott (R-S.C.) is expected to lead Senate Republicans on the Banking Committee, taking over for retiring Sen. Pat Toomey (R-Pa.). Sen. Scott is familiar with the community association housing model and played a critical role in passage of legislation directing the Federal Housing Administration to update the agency’s condominium project approval regulations.

Additionally, there are several gubernatorial races that CAI has closely followed this year:

With the reelection of Gov. Ron DeSantis, it is not unreasonable to expect a continuation of current policies in his second term, particularly given current circumstances. Much of Florida is still rebuilding after the destruction caused by Hurricane Ian in September, and localities are beginning their adoption of new condominium safety ordinances as mandated by SB 4D. Prior to Hurricane Ian, municipalities such as Tampa were beginning to discuss potential policy solutions to combat rising housing costs across the state. It is not unreasonable to expect that this kind of local-level experimentation will continue under DeSantis.

Despite polls showing a potentially close race, Gov. Kathy Hochul won a decisive, historic victory. Now that the dust has settled, residents of the Empire State will be looking to Hochul to continue along the path she started. Housing affordability and homelessness remain priorities for the governor, and New Yorkers will look to her to build on the foundations she started. While the governor has been focused primarily on increasing access to affordable housing, it should be expected that during her next term, broader housing affordability will be addressed in some capacity. During her first term, Hochul introduced a five-year, $25 billion plan that would see the creation or preservation of 100,000 low-income units.

In previous years, Democratic candidates have easily won gubernatorial elections but, as of writing, this year’s election remains too close to call. Republican Christine Drazan and Democrat Tina Kotek are within two points of each other with Kotek holding a slight lead. Independent candidate Betsy Johnson has nabbed around 8% of the vote. Housing affordability and supply has been a top issue in this race with Kotek promising to create a 10-year housing plan to address supply and affordability issues, while Drazan has promised regulatory reform to spur development.

CAI also has been monitoring local elections. A notable contest will shape housing policy in one of the country’s largest jurisdictions:

Although the mayoral race was between two Democratic candidates in a solidly blue city, it very quickly became a referendum on the overall approach that Democrats should be taking on the so-called kitchen sink issues: housing affordability; crime; homelessness; and overall cost of living. While both candidates have promised sweeping zoning code changes to spur the development of new housing, developer Rick Caruso’s proposal is a more market-centered approach with policies to reduce fees and overall red tape along with encouraging the continued development of smaller lots. Karen Bass’ approach takes a more government-driven track with an emphasis on the city’s existing transit-oriented development program and empowering residents to construct new accessory dwelling units and modular homes. As of writing, this race is considered too close to call, but it is clear that whoever the next mayor is, Angelenos can expect a clear break from long-standing policies.

Stay in touch with legislation CAI is tracking that may impact you or your community by regularly visiting www.caionline.org/advocacy.